Let’s answer the question, but before I do, you can watch my ARP lesson on Youtube here: https://youtu.be/aD_caJxD7nY and look at the lessons in the playlist:https://www.youtube.com/playlist?list=PL-nDeWT9WTjFT1syEIGsLTObjkx4XDOUt

ARP stands for Address Resolution Protocol.  This protocol is used by network nodes to match IP addresses to MAC addresses.  The original specification was RFC 826.  That has since been updated by RFC 5227, and RFC 5494.

So ARP provides method for hosts send message to destination address on physical network.  Ethernet hosts must convert a 32-bit IP address into a 48-bit Ethernet address.  The host checks its ARP cache to see if address mapping from IP to physical address is known:

ARP sits in Layer 2 of the OSI layered model, working with Ethernet and IPv4 as shown in the diagram: 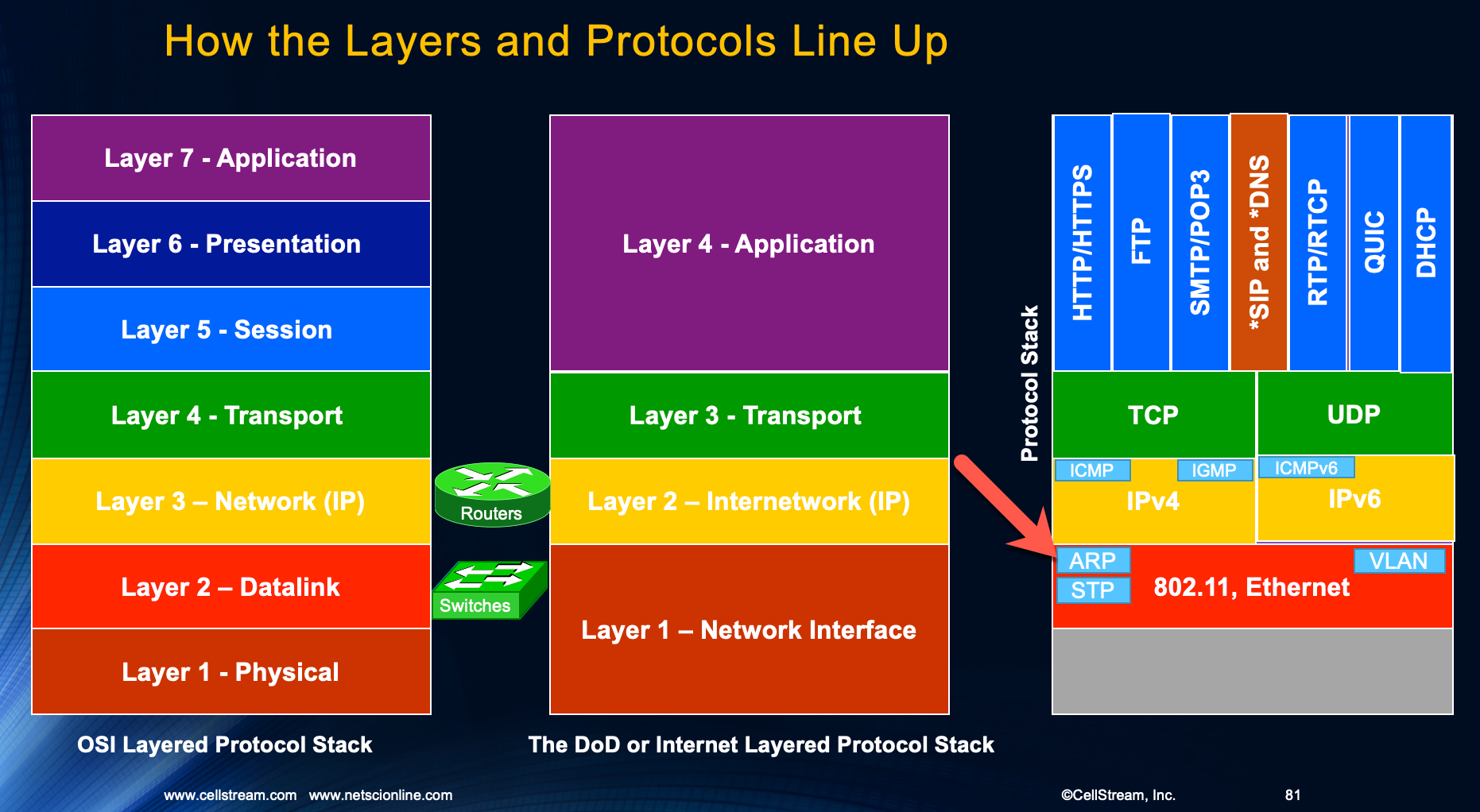 ARP does not serve IPv6.  In IPv6 networks, ARP functionality is replaced with Neighbor Discovery (ND) and that was added to the ICMPv6 protocol.  More information on ND here.

ARP is transparent to bridging/switching – bridges/switches at Layer 2 will send ARP broadcasts.  Routers are Layer 3, and they do not propagate Ethernet broadcasts – a router is Network Level device. 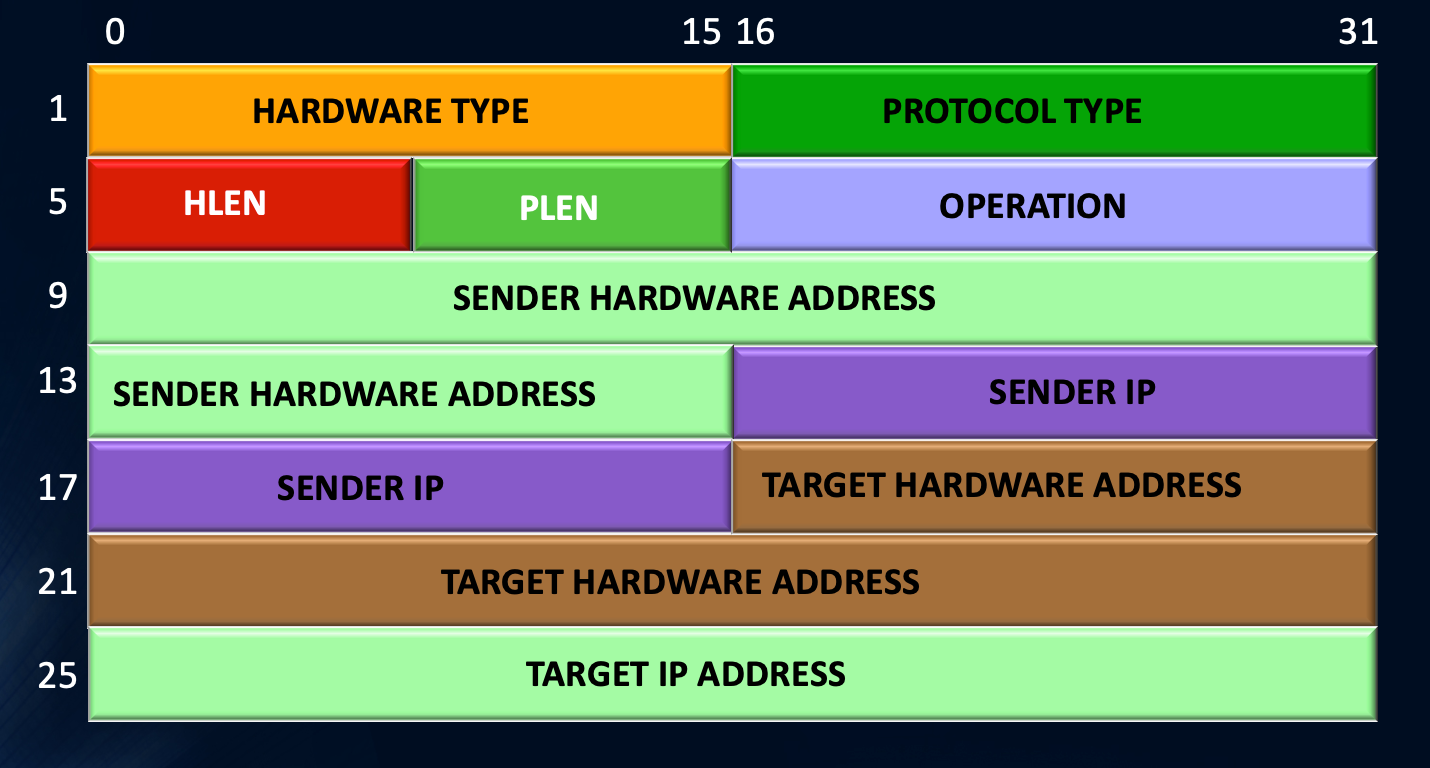 The operation of the ARP protocol looks like this:

ARP Announcements are a way to officially “claim” the IP address on the network.  The ARP Announcement is very similar to a Gratuitous ARP, with one notable exception: the Opcode in an ARP Announcement is set to 1, indicating a request. Typical Gratuitous ARP messages will have an Opcode set to 2.  Both the Sender MAC address and the Sender IP address create a complete ARP mapping, and hosts on the network can use this pair of addresses in their ARP table
Like the Gratuitous ARP, the Target MAC address is ignored, in this example it is set to 0000.0000.0000, some implementations of the ARP Announcement use ffff.ffff.ffff instead.  Finally, the Target IP confirms the subject of the communication: the IP address who’s uniqueness has now been confirmed.

The ARP Probe serves the purpose of polling the network to validate that an IP address is not already in use.  The idea is if the IP address in question is already in use, the initiator of the ARP Probe will expect a Response from original owner. Therefore, this ARP Probe is a request which might prompt a response:

The key difference between a Probe and a Request is that the Sender IP address is set to 0’s.  This is intentional, because the reason for sending the ARP Probe is to prevent an IP conflict.  If the target IP address is already in use, it would be very undesirable for other hosts on the network to inadvertently update their ARP cache based upon the contents of the ARP Probe.  This is also the primary difference between an ARP Probe and a Gratuitous ARP.  A Gratuitous ARP is meant to update all the ARP caches on the network, where as an ARP Probe deliberately prevents updating of ARP caches to continue protecting against IP address conflicts.

Wireshark users will find that if you use the following display filter you can find ARP probes in your packet capture:

You can use the arp command to view and modify the ARP table entries on the local computer. This may display all the known connections on your local aream network segment (if they have been active and in the cache). The arp command is useful for viewing the ARP cache and resolving address resolution problems.

Here are the switch definitions:

/?: Displays help at the command prompt.

To run the arp command in Windows click START> RUN> CMD.  Now enter ‘arp -a’ at the > prompt:

Using arp on a MAC or Linux System

To run the arp command in MAC-OSX or Linux, first open a Terminal window.  Now enter ‘arp -a’ at the $ or # prompt: 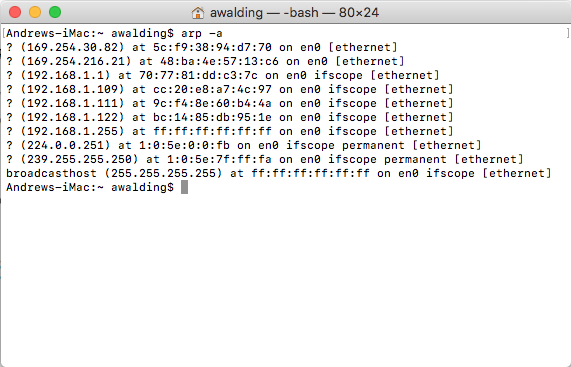 When starting up, some operating systems like Windows perform a gratuitous ARP to detect any duplication with its own IP address. While this function detects most cases of duplicate IP addresses, in a few situations two TCP/IP hosts on the same network can be configured for the same IP address.  Since the MAC and IP address mapping is done by the ARP module, which uses the first ARP response it receives, the impostor computer’s reply sometimes comes back before the intended computer’s reply.

These problems are difficult to isolate and track down. Use the arp -a command to display the mappings in the ARP cache. If you know the Ethernet address for the remote computer you wish to use, you can easily determine whether the two match. If not, use the arp -d command to delete the entry, then use Ping with the same address (forcing an ARP), and check the Ethernet address in the cache again by using arp -a .  If both computers are on the same network, you will eventually get a response from the imposter computer. If not, you might have to capture the traffic from the impostor host with Network Monitor to determine the owner or location of the system.

Troubleshooting the ARP cache can be difficult because the problems associated with it are so often intermittent.  The exception to this is when you find that the wrong host responds to a command, perhaps when you use a Netuse or Telnet command. The symptoms of invalid entries in the ARP cache are harder to reproduce and involve intermittent problems that only affect a few hosts. The underlying problem is that two computers are using the same IP address on the network. You only see the problems intermittently because the most recent ARP table entry is always the one from the host that responded more quickly to any particular ARP request.

To address the problem, display the ARP table using the arp -a command. Since addresses assigned by DHCP do not cause address conflicts like those described here, the main source of these conflicts is likely to be static IP addresses. Maintaining a list of static addresses (and corresponding MAC addresses) as they are assigned can help you track down any address conflict just by examining the IP and MAC address pairs from the ARP table and comparing them to the recorded values.

Used to obtain Network Layer addresses (for example, IP addresses) of other nodes from Data Link Layer (Layer 2) addresses.  Since ARP translates Layer 3 addresses to Layer 2 addresses, InARP may be described as its inverse.  InARP is implemented as a protocol extension to ARP: it uses the same packet format as ARP, but different operation codes.  It is primarily used in Frame Relay and ATM networks, in which Layer 2 addresses of virtual circuits are sometimes obtained from Layer 2 signaling, and the corresponding Layer 3 addresses must be available before those virtual circuits can be used.

If you do not have a record of all IP and MAC address pairs on your network, you might want to examine the manufacturer bytes of the MAC addresses for inconsistencies. These three-byte numbers are called Organizationally Unique Identifiers (OUIs) and are assigned by the Institute of Electrical and Electronics Engineers (IEEE); the first three bytes of each MAC address identify the card’s manufacturer. Knowing what equipment you installed and comparing that with the values returned by arp -a might allow you to determine which static address was entered in error.

Another possible issue is that DHCP might have detected a duplicate MAC/card already on the network, and thus denied a computer’s request to join. Other DHCP and related messages here can often quickly isolate and solve a problem.