At a recent course I taught in New England, one of the students wanted to capture Wi-Fi packets on their Windows Surface Pro.  Of course, I referred them to my article on how to capture Wi-Fi traffic on Windows for free article.  The student tried this and was not able to properly configure Microsoft Network Monitor to do the job on the Windows Surface Pro platform [always a mystery to me about the complexities of Microsoft].

I suggested they try using Linux instead, to get around whatever difficulty Microsoft built into the Surface.  They tried a Linux virtual machine (VM) and had no luck with this either.  They then even tried booting Linux from a bootable disk with no luck.  Finally, they tried capturing on a different machine that ran Linux as it’s primary operating system and had difficulty as well.

I am sure others have suffered through this, in my opinion, needless pain.  One horribly expensive option is to buy an Apple!  You can easily put your interfaces into monitor mode and MAC-OS.  Look at my article here (https://www.cellstream.com/reference-reading/tipsandtricks/442-capturing-wi-fi-wlan-packets-in-wireshark-on-macosx ) for MAC users.  OK, ok, perhaps not an option.

Note:  I do not show it here, but you may want to get our Wi-Fi/WLAN profile for Wireshark: https://www.cellstream.com/reference-reading/tipsandtricks/284-a-wireshark-wifi-profile  Honestly, this is optional but if you want to do it right…. 🙂

Let’s look at the possibilities.  The issue here is we are trying to do two things:

Further, we have the issue of virtual networking in either VirtualBox or VMware.  We also have the problem of multiple distributions of Linux.  I am going to deal with two: Ubuntu and Kali Linux.

So as you can see this is messy.  I hope that my answers either help or if not, that when others find further details they will add comments below.  But before I do, if you have Wireshark loaded onto your Linux OS and cannot see any interfaces like shown below (interfaces should show up in the center white area): 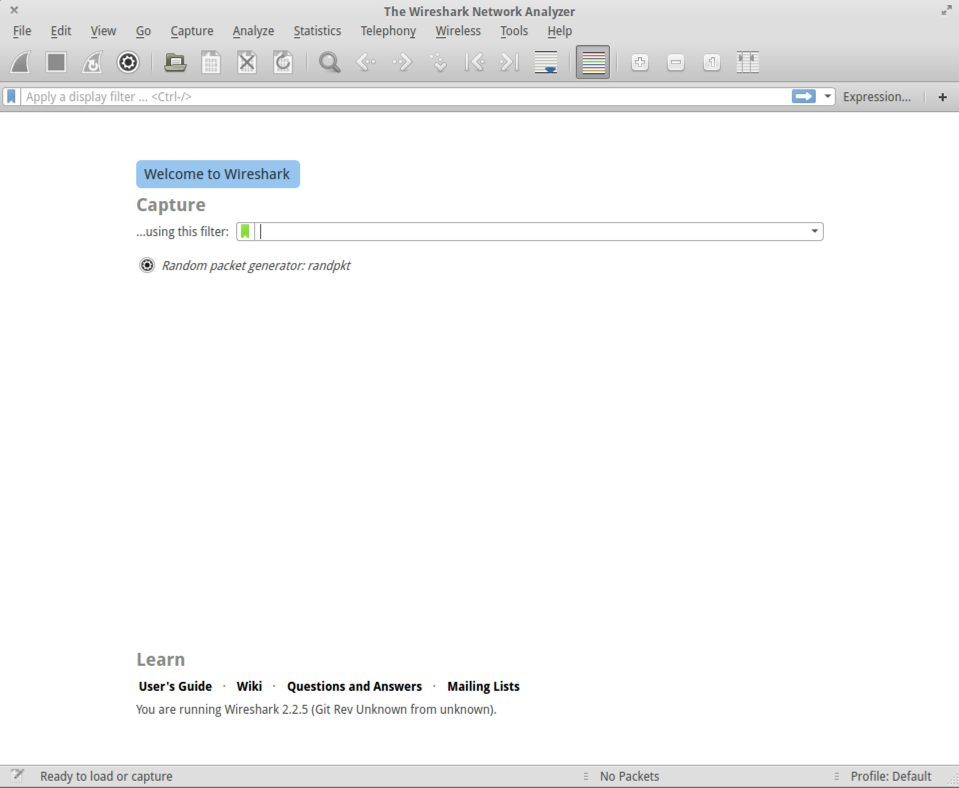 Make sure you read this article: https://www.cellstream.com/intranet/reference-reading/faq/106-how-do-i-get-ubuntu-to-show-interfaces-in-wireshark.html

That said let’s move on.

If you run Linux in a virtual environment such as VirtualBox or VMware, you will be in for a bit of a surprise.  Both these environments allow you to configure the network settings for each virtual machine.  Both will bridge the Wireless interface to your Linux VM, which is the way to get your VM to use the Wireless interface.  However, in the latest versions, they both do this through a bridge module, and so your VM will only see the interface as a regular ethernet connection.  This means you cannot access the Wireless interface built into your machine directly through the VM to put it in monitor mode.

You have two options:

Accessing the Wireless Interface in Linux on a Stand Alone System

It is important to know if you can see the wireless interface in your Linux environment.  To check this, open a terminal window and enter the following command: iwconfig

You should see an output that displays your system network interfaces that support wireless extensions: 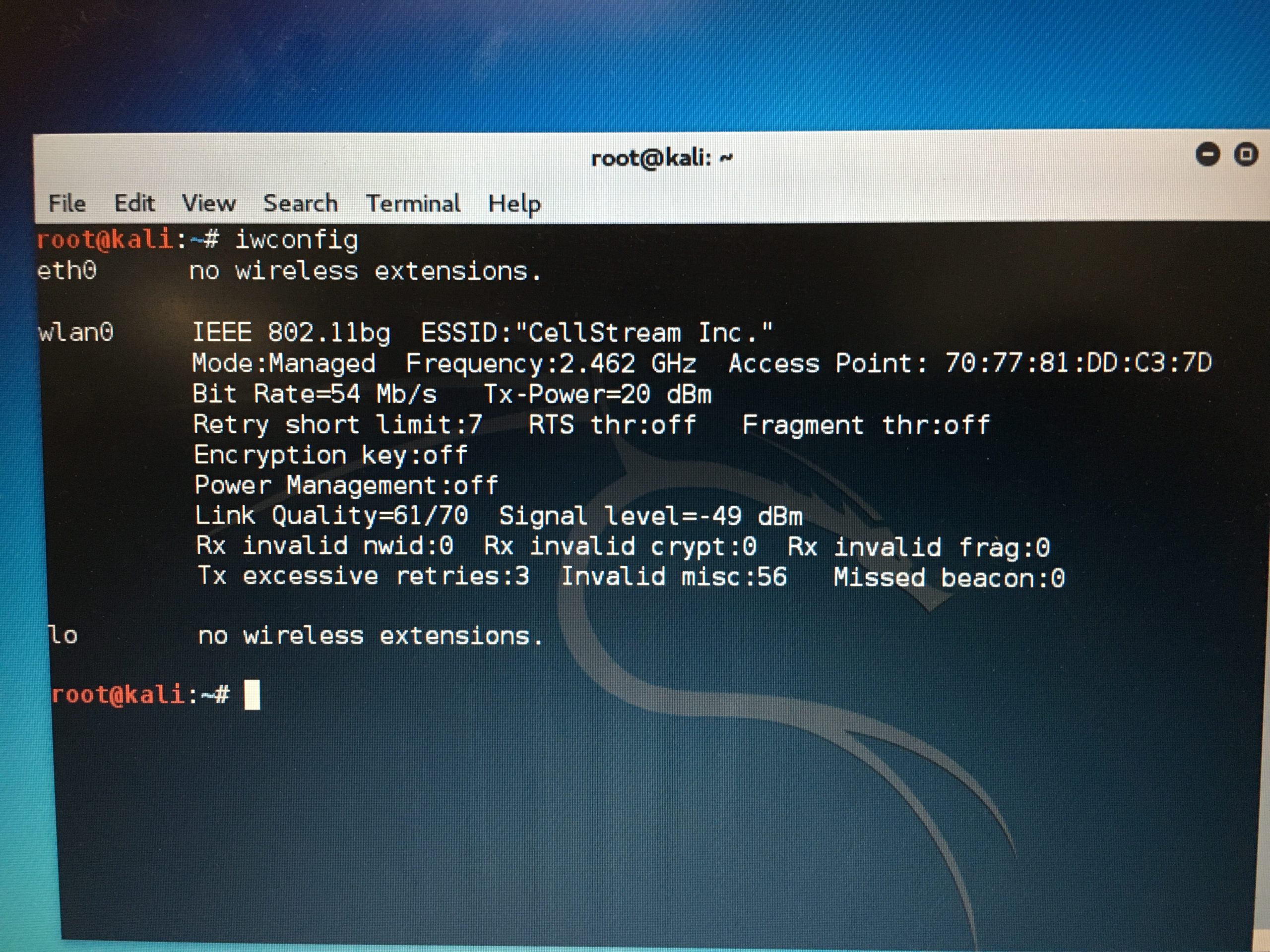 If you look closely at the second line, it says ‘Mode: Managed”.  This means the system is attached to an Access Point and is operational.  It is followed by a bunch of physical layer information on the connection.

On newer Linux systems it may look like this (note the WLAN interface is not ‘wlan0’ but now ‘wlo1’: 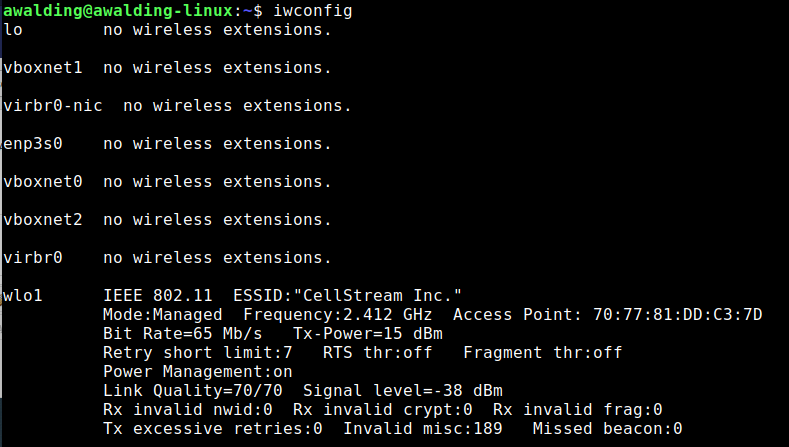 Now the next step is to put the interface into Monitor mode.  I was a superuser so I did not have to use ‘sudo’, but you may have to do this on your Linux box.  Simply add ‘sudo’ before all the commands below: 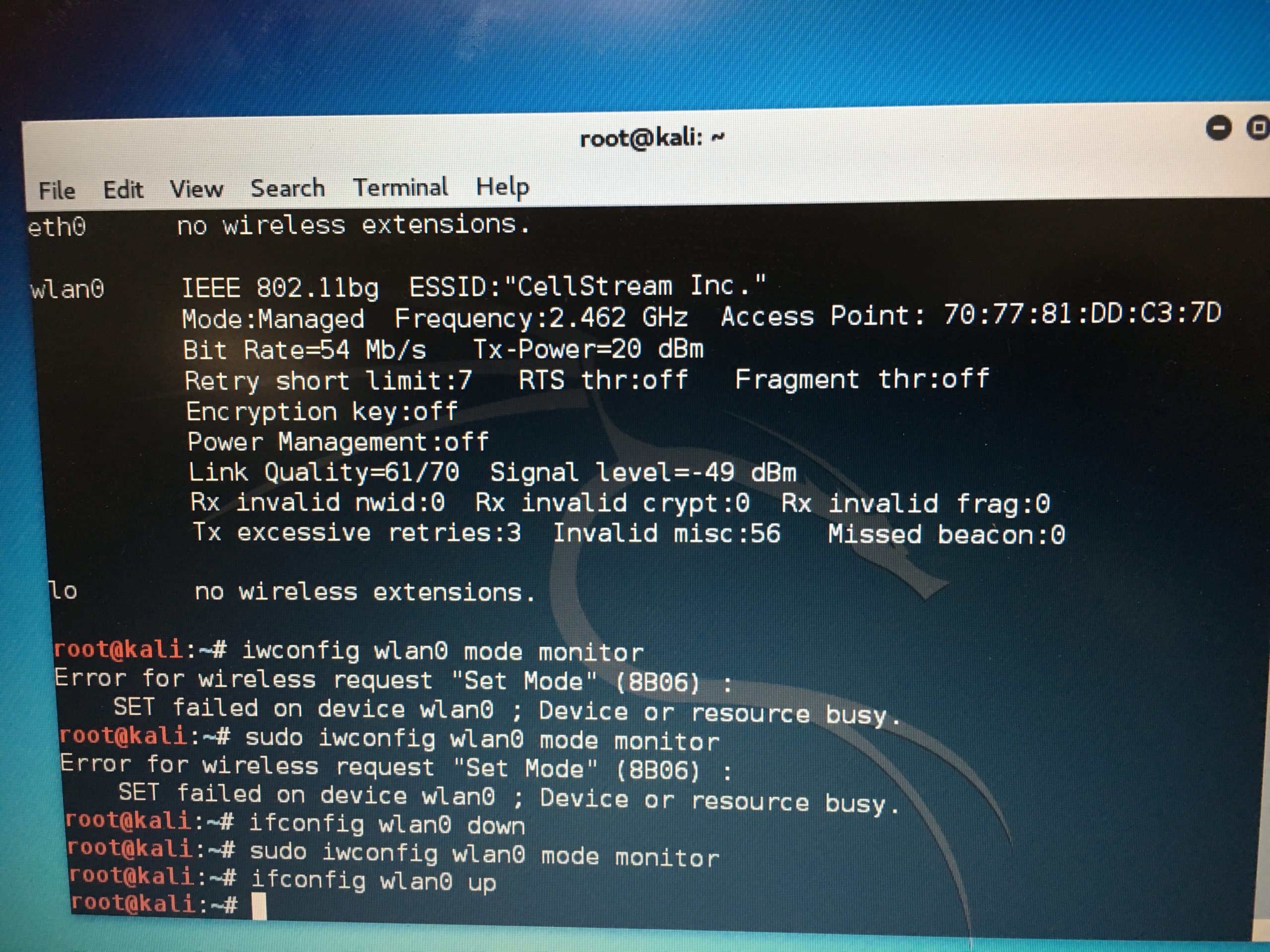 To do this you will see I tried above to type the command: iwconfig wlan0 mode monitor

And you see I got an error.  So I tried it with ‘sudo’ and got the same error.  The problem here is I need to take the interface offline first.

So the next command I entered ‘ifconfig wlan0 down‘

Then I tried once again to put the interface into monitor mode, and it worked.  If you are not the superuser, you may need to use ‘sudo’ in front of these commands.

Lastly, I brought the interface back up with ‘ifconfig wlan0 up‘.

If you cannot get the interface into Monitor Mode, then that means it probably does not support monitor mode.  So let’s digress a little for those folks.  This means that you need to get an external Wi-Fi interface that does.  The following chipsets are known to support monitor mode and packet injection, but there may be more:

Aircrack-ng also lists a few cards as best in class on its site, so if you’re interested in more suggestions, check it out (some of the ones listed above are also on its list).

In newer versions of Linux with the new interface nomenclature you need to replace ‘wlan0’ in the above commands with ‘wlo1’.  So the commands would be:

Now let’s run Wireshark and capture on the wireless interface: 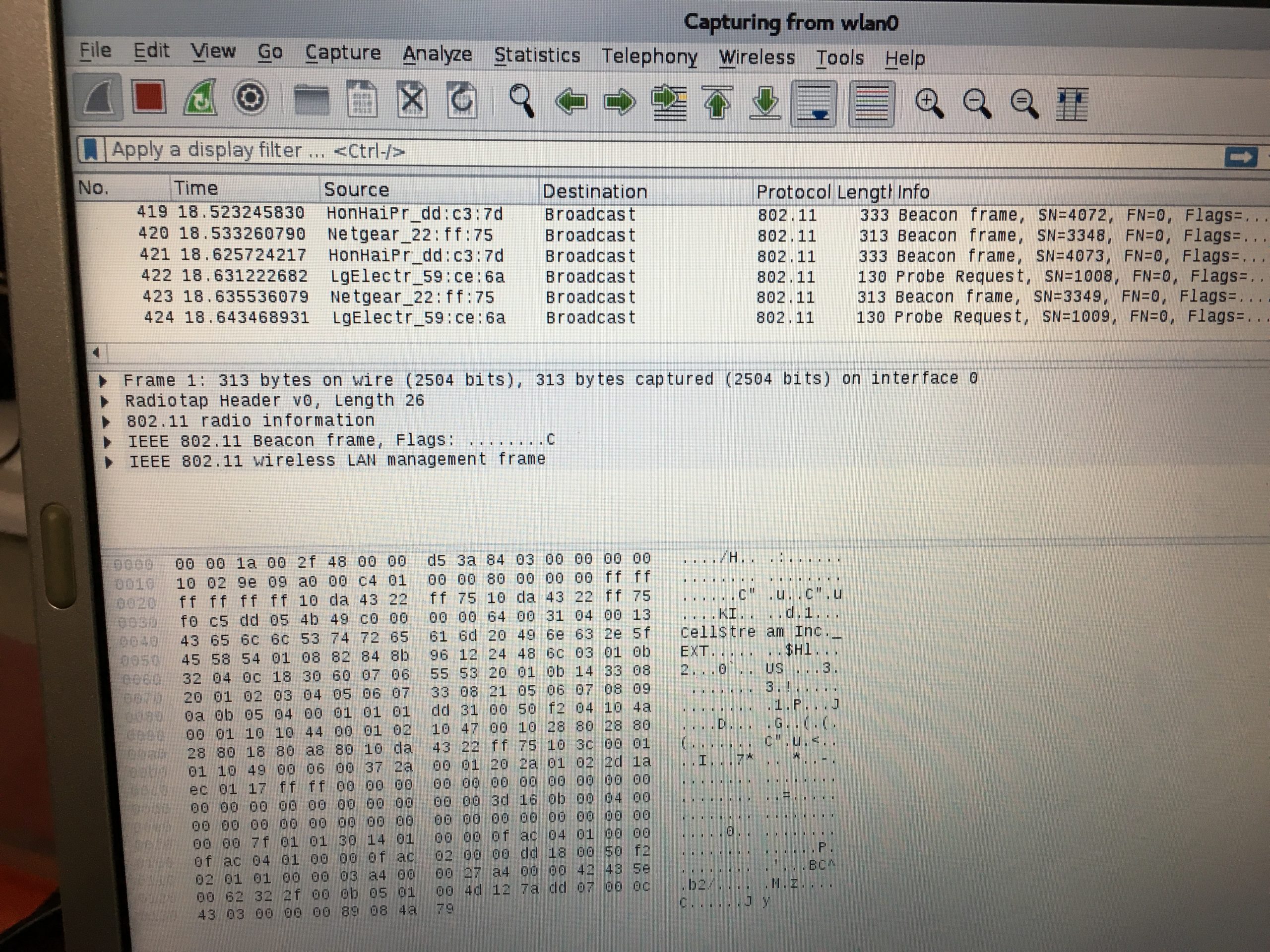 Looks perfect, and I can see the Wi-Fi control frames.

Now to return the interface to normal, you need to shut it down, return it to managed mode and then bring it back up:

Just replace the ‘wlan0’ with ‘wlo1’ for the newer versions of Linux.

Perfect!  All of this should work on any version of Linux.

Some Other Linux and Wi-Fi Stuff

I had one person tell me that they could not put their hardware into monitor mode, so I had them check a few things.  First, there is an additional command in Linux called the ‘iw’ command that was to have replaced iwconfig, and it is a little different.

Nice!  We see the interface is wlan0, we see the MAC address, that we are in managed mode on channel 11 with the channel width and center frequency.

You can get deeper information with the ‘iw phy phy0 info‘ command:

Wow, that is a truly nice report on all the WLAN parameters and service set features.

Now, what if you wanted to a) put your system into monitor mode, and b) set the channel/frequency to monitor?  The output above clearly shows the channels and frequencies supported by the system hardware.  It is easy to take that information and then use it.  For example, if we wanted channel 11, we simply follow the process discussed earlier to put the Wi-Fi interface into monitor mode.  If we wanted to monitor channel 2 which is at 2417 MHz, then we do the following (keep in mind you may have to put ‘sudo’ in front of these commands): 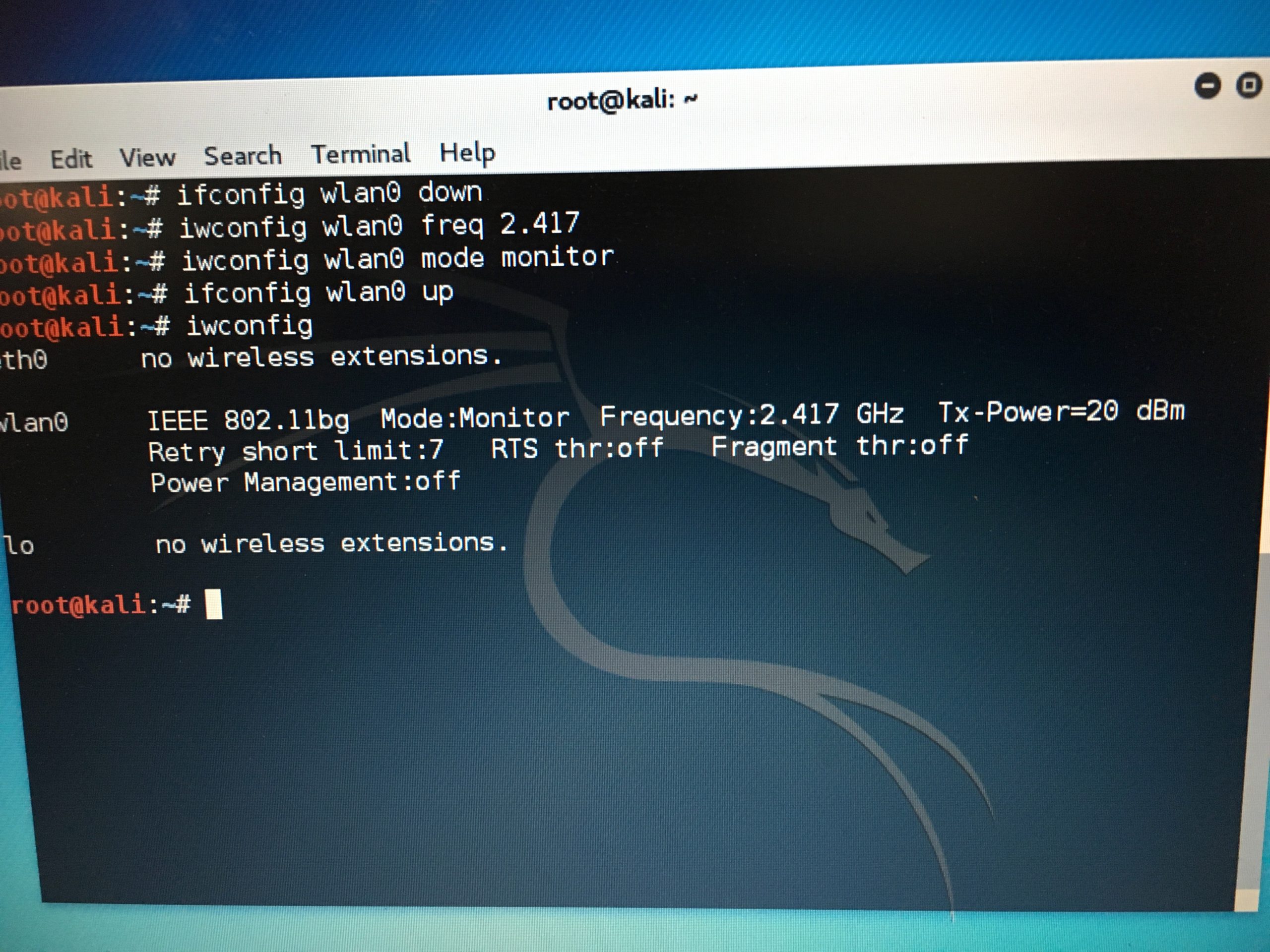 We can see that the interface is in monitor mode and the frequency has changed.

You can also do this by channel number.  To assign the interface to a particular channel:

Replace xx with the number of the channel for the wi-fi you’re trying to connect.

Now we can start capturing on Wireshark using the wlan0 interface.  If you previously had Wireshark open, close it and re-open it. 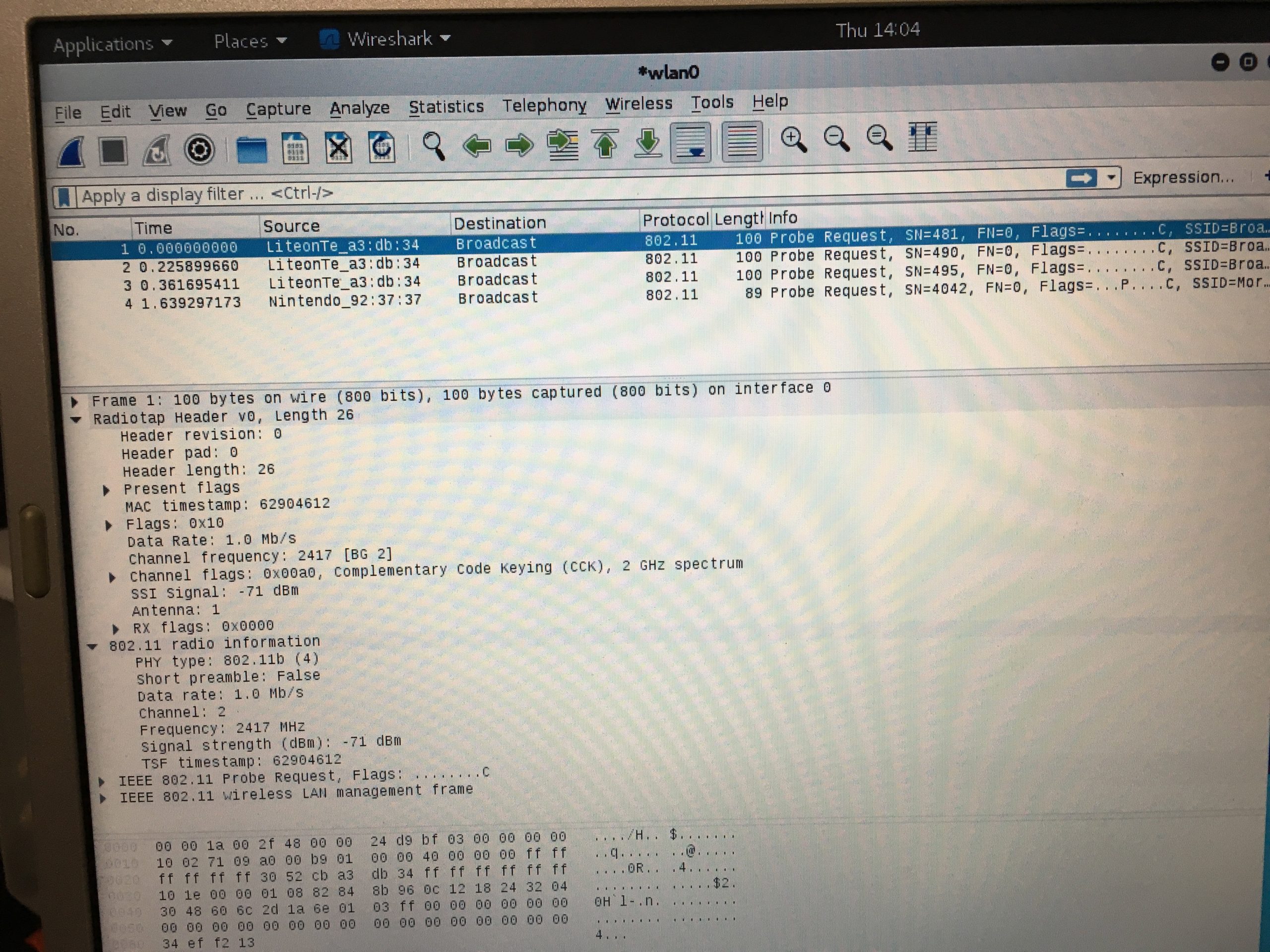 I expanded the Radiotap header and you can see that we are capturing on channel 2!  Only probe requests as no one is on that channel (thank goodness!).

To return everything to normal, issue these commands:

You may have to reboot Linux to get your wireless icon back in the tool bar.

Let’s begin with taking a step backwards first, and look at how to install Wireshark onto Linux.  Kali Linux comes with Wireshark installed.  Ubuntu does not.  Whether you are on a stand alone system or a virtual machine, the steps are always the same:

Now just run Wireshark by typing Wireshark in the terminal window or executing it from the applications list.

Now just run Wireshark by typing Wireshark in the terminal window or executing it from the applications list.