Have you noticed a lot of QUIC protocol in your packet captures?  I certainly have, and we had better talk about what this is.

QUIC is a new protocol created by the fine folks at Google.  It stands for Google Quick UDP Internet Connections.  It is an experimental protocol that was introduced back in 2012 on the Chrome and Chromium platforms, and is getting broader use by the day as users continue to flee from Microsoft’s Internet Explorer and Edge.  Google calls it a transport layer protocol (which would be Layer 4) but it actually runs over UDP which is at Layer 4 – so we see it as a new Layer between 4 and 5.

Note: Google originally called this protocol “QUIC” as you can tell by the original logo, but now that original version is referred to as gQUIC, whereas the IETF has chosen to call the newer version they are working on as “QUIC” – confusing – yes – so when I saw QUIC here I am referring to Googles original QUIC protocol.

The target of QUIC, although Google soft shoes this point, is to essentially replace TCP.  TCP has been around a long time, and while it has received many updates to improve function, speed, and scalability, due TCP’s dependency on round-trip exchanges and acknowlegements (ACK’s), many believe it is becomming outdated based on today’s higher speed demands of the Internet.  By high speed demands, what we mean is that in the original web pages of the Internet, life was simple, it took one TCP session to send the page.  Today, it can take dozens of TCP connections to load all the elements on a single web page.  These multiple connections take time and have to be processed in order.  TCP has no ability to multiplex these connections. 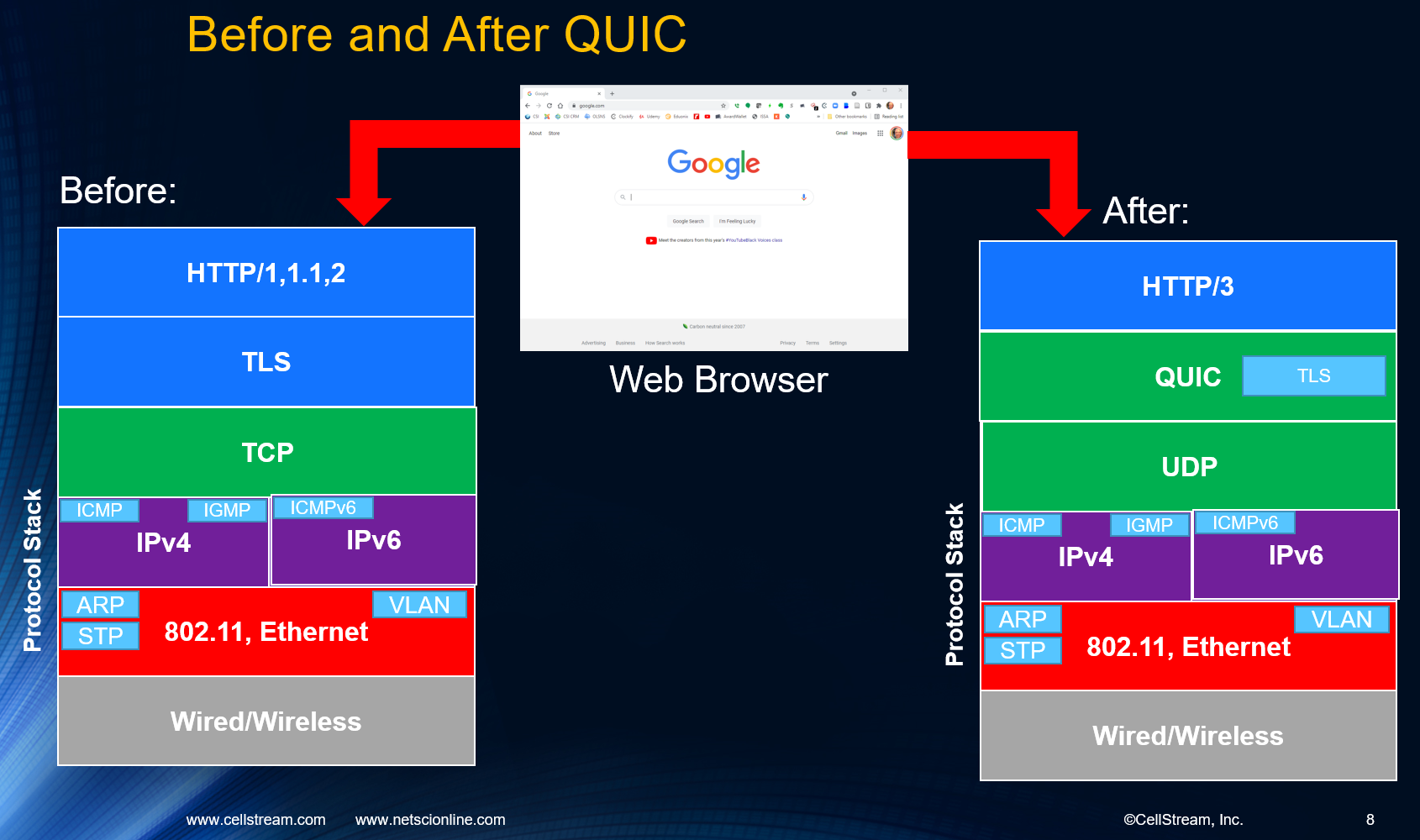 In fact, one of the problems that can occur is that let’s say the first of several dozen TCP connections is slow or ties up the resources of the receiver.  Other processes won’t even start!  So that first process essentially blocks other processes from even starting.  Google calls this ‘head of the line blocking’.

One attempt to improve this multiplexing was a protocol that Google called SPDY (‘speedy’).  This was done above the transport layer, and SPDY eventually became what we now call HTTP/2.  But SPDY did not fix all the problems.  You can read more on SPDY here.

Let’s get back to QUIC.  QUIC supports a set of multiplexed connections between two endpoints over UDP, and was designed to provide security protection equivalent to TLS/SSL.  So along with reduced connection and transport latency, and bandwidth estimation in each direction to avoid congestion, QUIC’s achieves its main goal to improve perceived performance of connection-oriented web applications that are currently using TCP.

Now – as mentioned above, the IETF has picked up on Google’s development and the original QUIC protocol is now referred to as GQUIC.  The IETF is busy reasserting this design under the new-not new name QUIC and there are approximately 30 internet draft specifications dealing with the new version of QUIC.  You can find those drafts here.

Google’s Own Explanation of what QUIC is

You can also view Google’s own explanation about QUIC in the following video:

Examining GQUIC on Your Computer

One of the cool things that Google does for us is it allows us to view QUIC performance within Chrome.  So if you have Chrome installed, open a new tab and enter the following:

You can see the number of events, the QUIC version that you are running, and Connection ID’s.  This screen will update as connections come and go.

If you click on one of your connection ID’s, and then on the next page, click on the Source Type field, you will get something that looks like this: 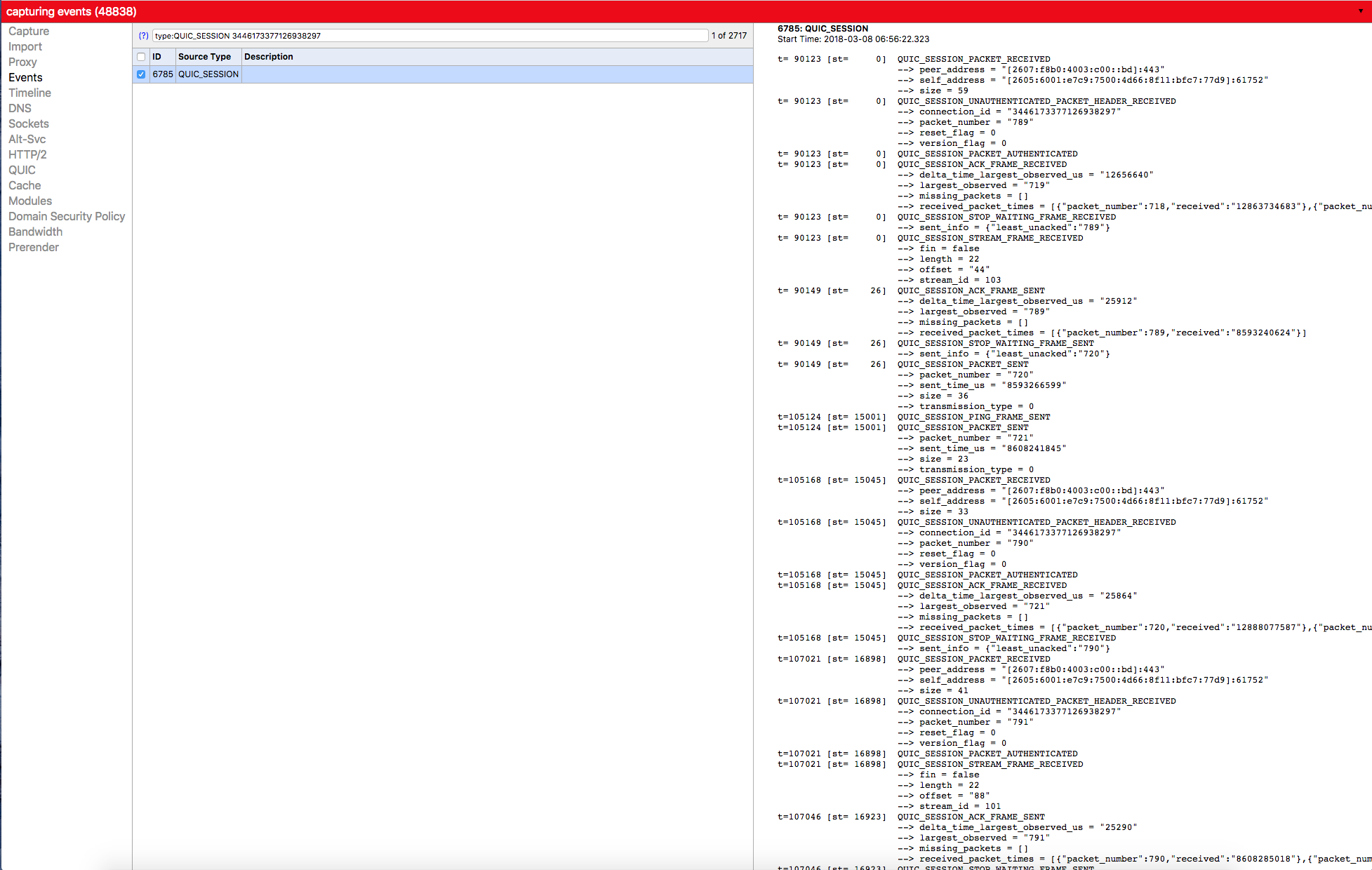 To the right, you will see the actual packet process that QUIC is using as all the protocol processes are dissected (well, without the data).  This is a live screen, and it will continue to update if there is data going in the session.

Wireshark does have the ability to dissect QUIC processes as well (ofcourse it cannot decrypt the data), and we will discuss this in another article.

We hope this article has helped you to understand what QUIC is at an introductory level.  Look for more details to come by simply clicking on the QUIC tag below.