Great question!  One I have received many queries on lately.

Let’s get some terms out of the way first:

ACI = This stands for Cisco Application Centric Infrastructure, so it is not one thing, but rather a collection of things.  From the Cisco ACI web page: Cisco ACI consists of:

APIC = This is a thing.  It stands for Cisco Application Policy Infrastructure Controller.  I will discuss this more below.

Now I can get to answering the question.  Cisco and SDN have had a bit of a rough start.  Cisco missed acquiring Nicira, which was acquired by their frienemy VMware.  What followed was some mixed messaging and marketing on SDN in general.  Let’s face it, Virtualization has been a wild fire of innovation, and network virtualization is a hot bed within the wild fire.  Many companies that have been traditional hardware/software vendors are struggling as products within their portfolios are competing against each other.  If I can take a bare metal server and convert it into my top of rack switch/router, why do I need to buy hardware?  I am not saying that is entirely possible, nor am I saying that data center operators do not need to buy switches and routers.  What I am strongly suggesting is that this is one of those interesting areas that many of us are watching carefully.

What the ACI and APIC are at the time of this writing is Cisco’s giant step forward in term of the network virtualization and network function virtualization that are rapidly developing.  If you are an old school person, you could simply say that the APIC is a network management platform, and stop the discussion at that.  The APIC is about organizing data and designing work flows across a network infrastructure.  While it has the word “Controller” in its name, it is not like a typical SDN Controller.  SDN Controllers are part of the data plane in that they receive the first packet of an application flow and then send the corresponding policies to the network of switches, including path.  The APIC does not do this.

Here is a summary comparison: 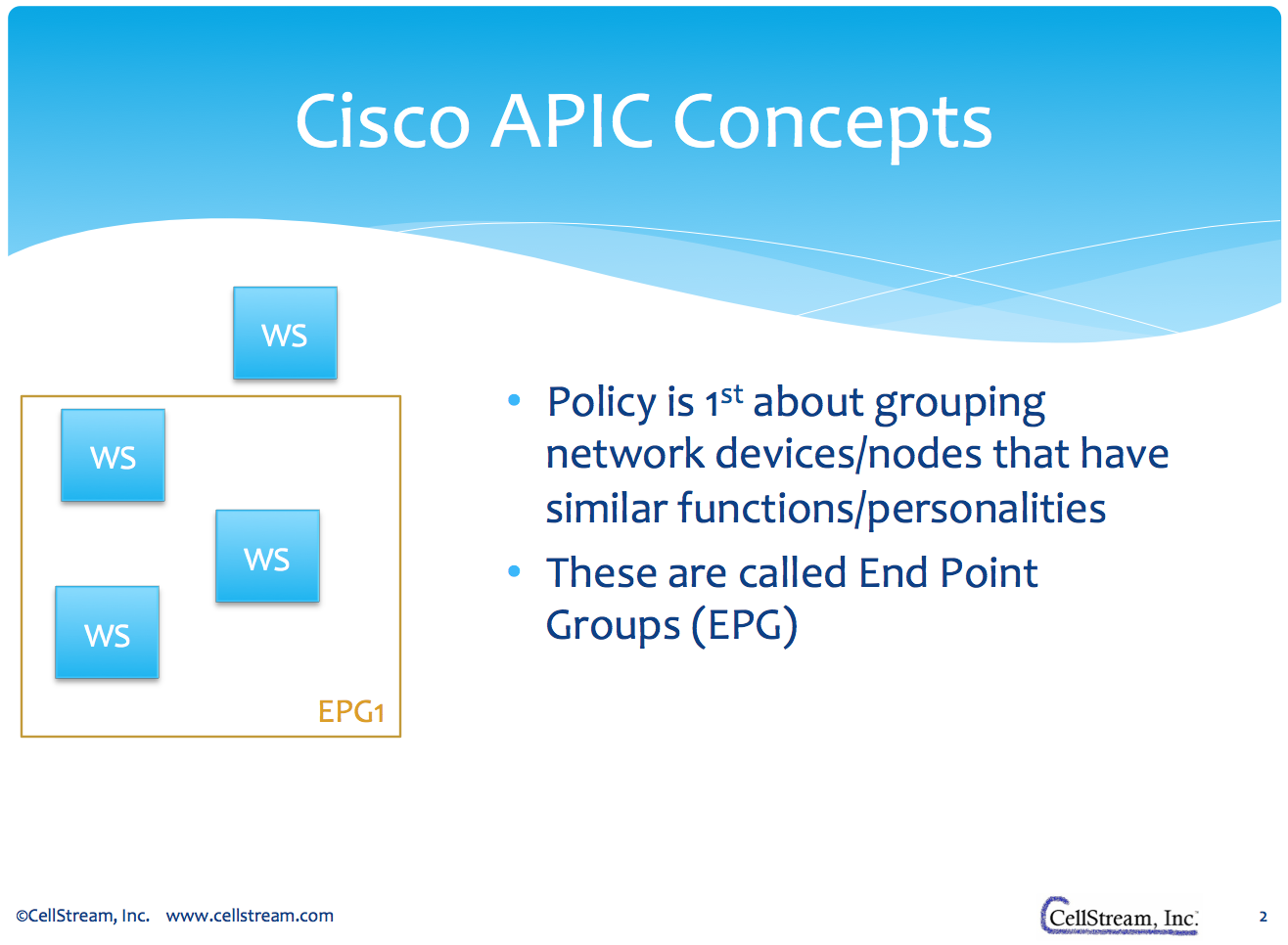 The way that the APIC sees the world begins with End Point Groups.

The slide shows three Web Servers that will be providing a similar set of applications to outside a certain enterprise.  These web servers will be treated similarly, so we can add them into an EPG.

Via simple on screen click and group process, these network devices are easily grouped together and named.

If you think about the three tier model of Web Servers <> Applications Servers <> Data Bases, we could do the same process of grouping the applications servers and the database servers in this manner.

The next part is extremely important in the APIC.  Once your EPG’s are specified you can then add what Cisco calls a “contract” between the EPG’s to define what communications can occur.  Everything else is blocked by default.  For example the Web Server cannot talk directly to the Database Server.

Policies are reminiscent of ACL’s in router and switches, but of course much more powerful.  What the APIC system does it it then communicates the appropriate command line or protocol commands (the system supports OpenFlow as well as Cisco’s home grown protocol) to then implement the policies onto the network infrastructure.

Next is where things get interesting.  Imagine for a moment that these policies all exists within a collection of Virtual Machines (VM’s) at a data center for a particular customer and that customer decides they want to move servers to a different data center due to an impeding typhoon.  The APIC system allows the abstraction of the functions, policies/contracts and configuration to be transported to another APIC in the second data center.  This move can be accomplished in comparably minute time frames using this orchestration.

I hope this explain and clarifies, albeit at a high level, and provides an answer to the question.  If you would like to look a little deeper into SDN you can look here.  Also, there are some details in our OpenFlow explanation you can find here.