Here are some great Windows command line entries you can make to examine and configure IPv6 (assuming your version of Windows does so).  We will discuss use of the “netsh” and “netstat” commands below.

For more info on the “netstat” command click here.

Let’s start with some simple ones.

First, let’s check the IPCONFIG from the Start>Run>CMD in Windows: 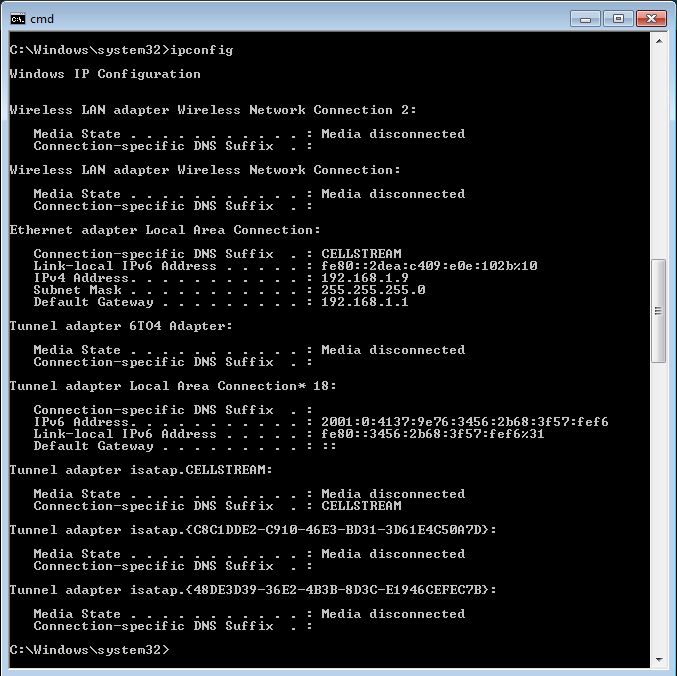 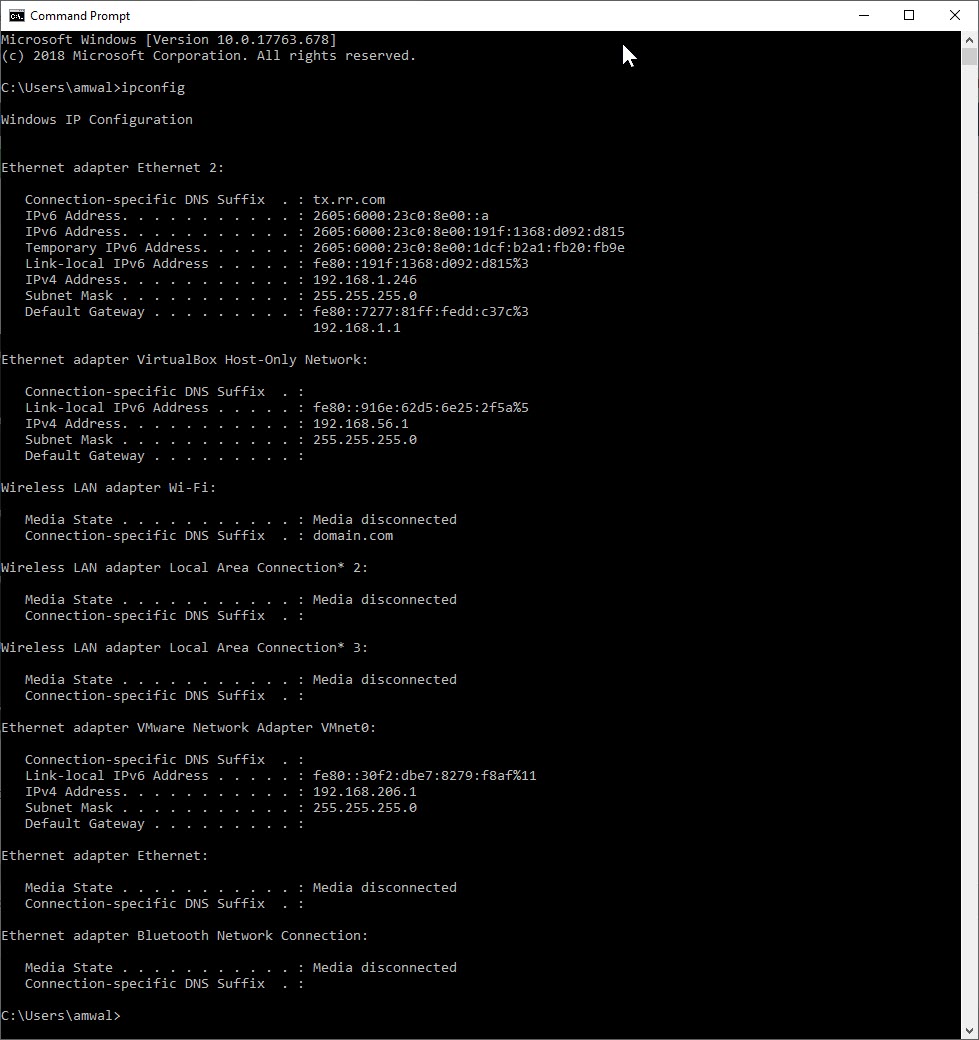 To view details use the following command:

You can see from this snipped portion of the output, that DHCPv6 and DNS information is included: 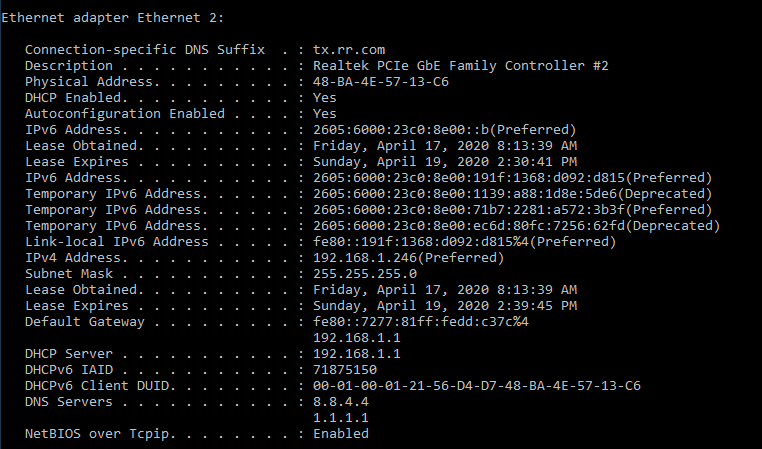 The following command displays the routing table in your computer: 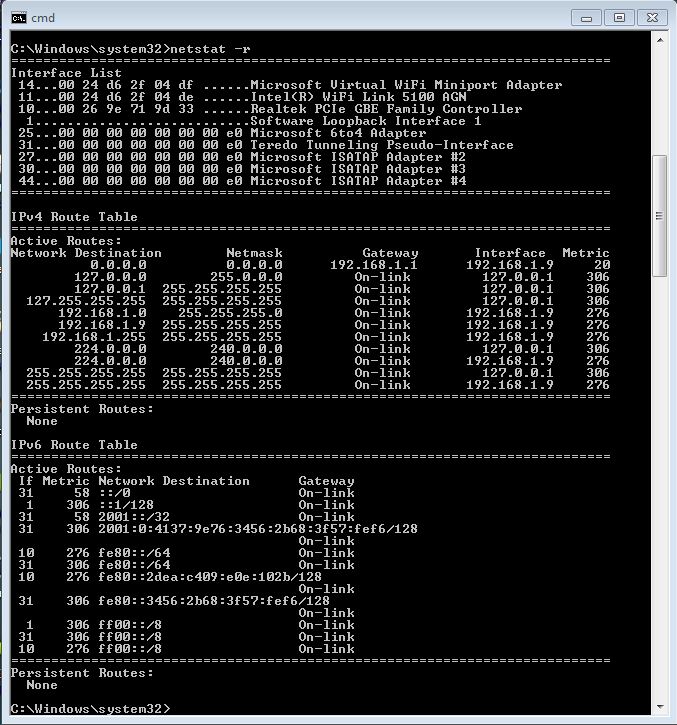 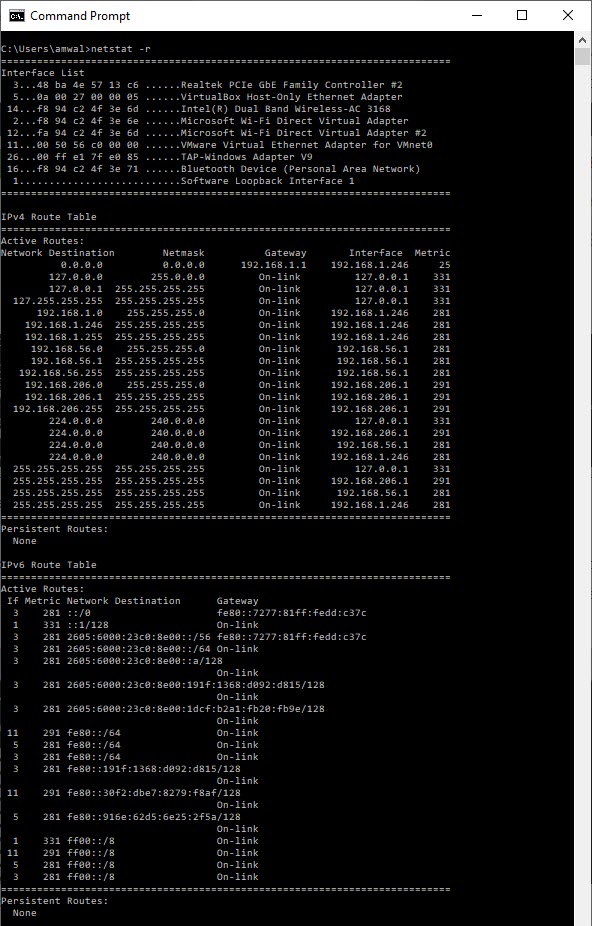 We can clearly see the IPv6 Routing table with the Link Local addresses and the IPv6 Multicast groups.  Ouput has changed little between the older and newer versions.

Let’s see if there has been any general IPv6 traffic on the interfaces.  You can do this with the following command: 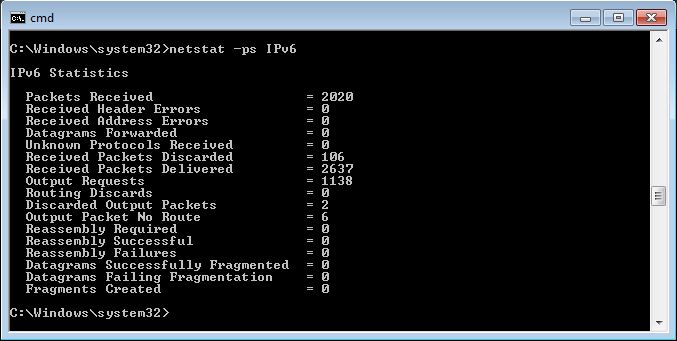 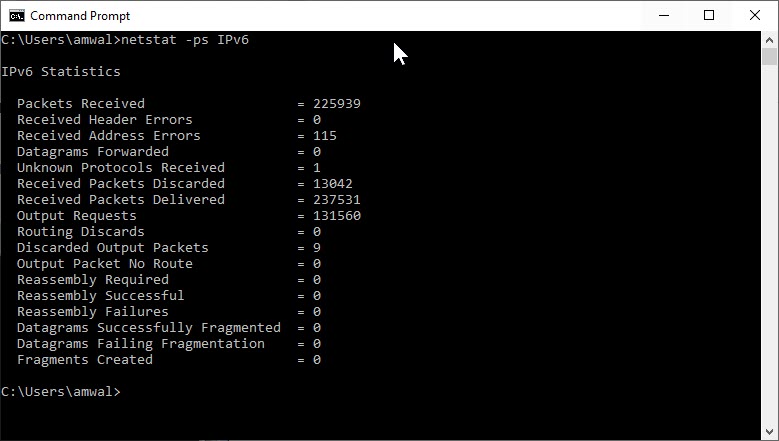 Again little change between the older and newer versions of Windows.

OK, now let’s be more specific.  What about ICMPv6?  Try the following command: 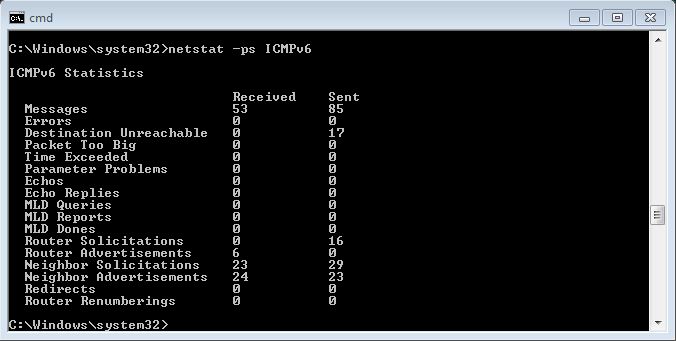 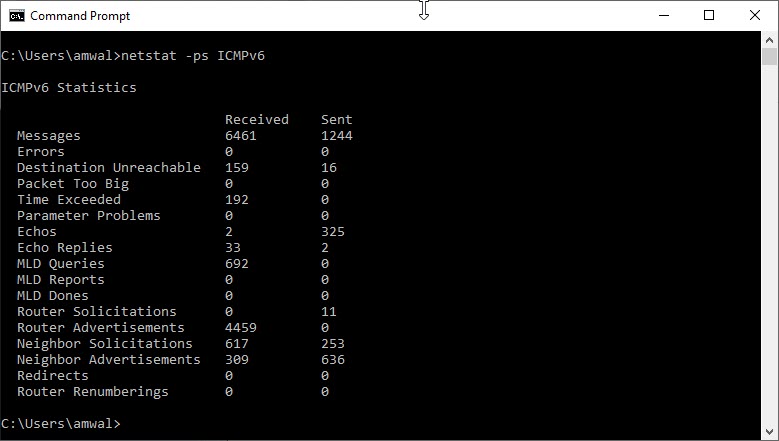 Pretty cool. Similarly, we can use netstat to view the TCP and UDP packet counts for IPv6: 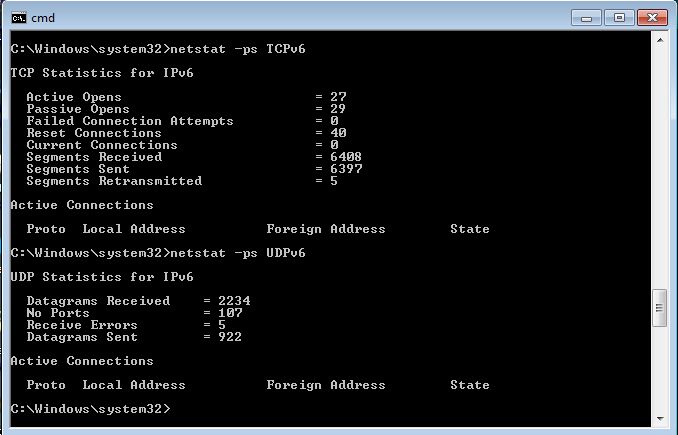 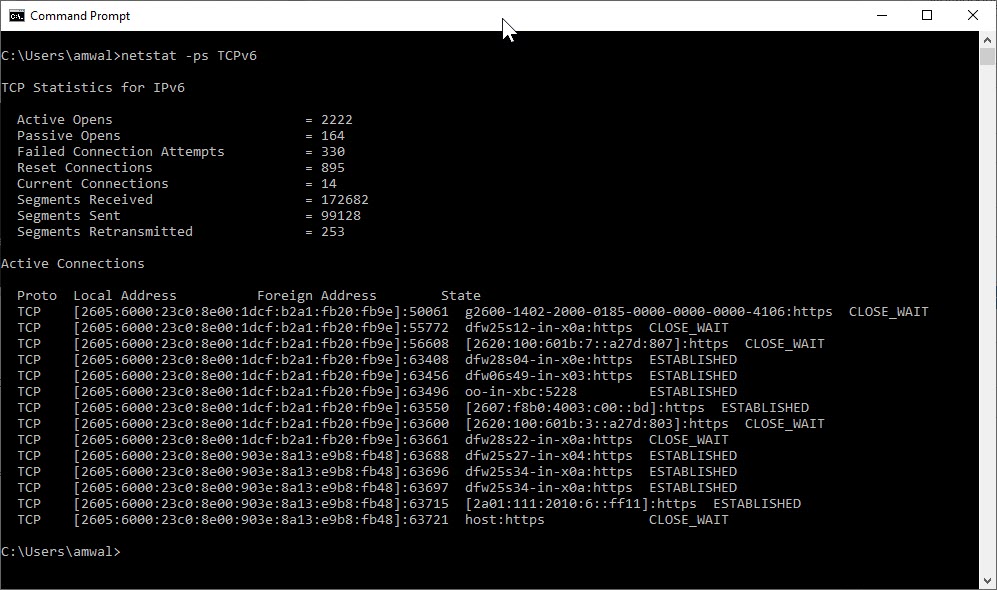 The main difference is that in the newer snapshot for TCP, there were active connections present when I performed the command.  Else they are essentially no different.

Another way to see the IPv6 Route Table is by using the “route” command. The command-line Route tool enables entries in the local IPv4 and IPv6 routing tables; such routes can direct network traffic to local, WAN, and internet network map.

Here is an IPv6 route test example in the older version of Windows:

Here is an IPv6 route test example in the newer version of Windows: 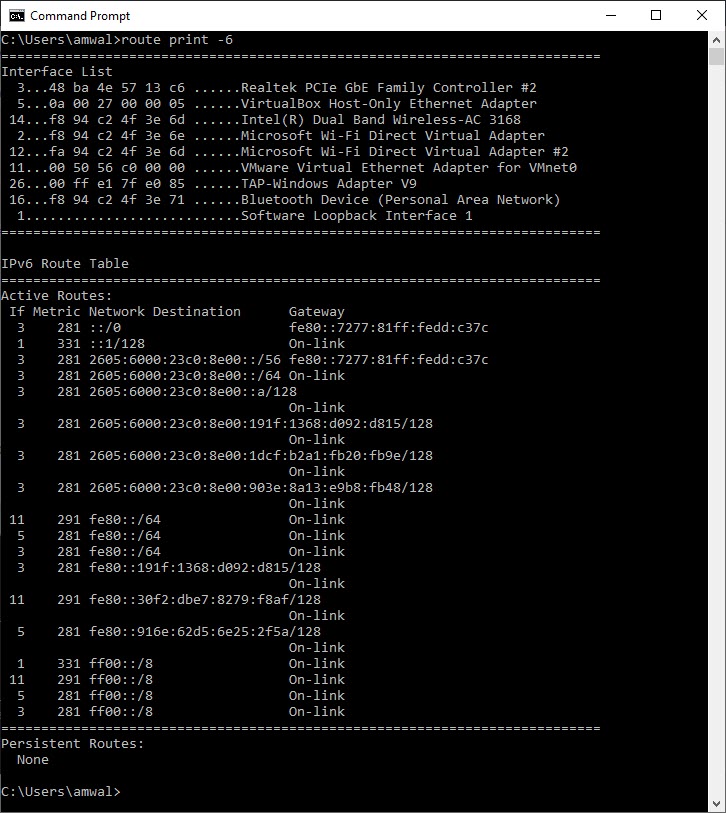 Another great tool for looking at your IPv6 configuration is the “netsh” scripting tool.  We have a separate article on netsh here.

Let’s first look at the IPv6 addresses, this time through the netsh command: 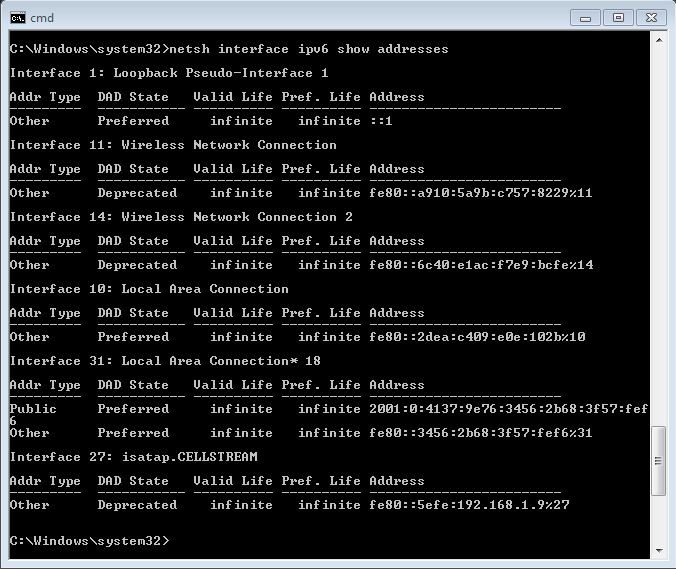 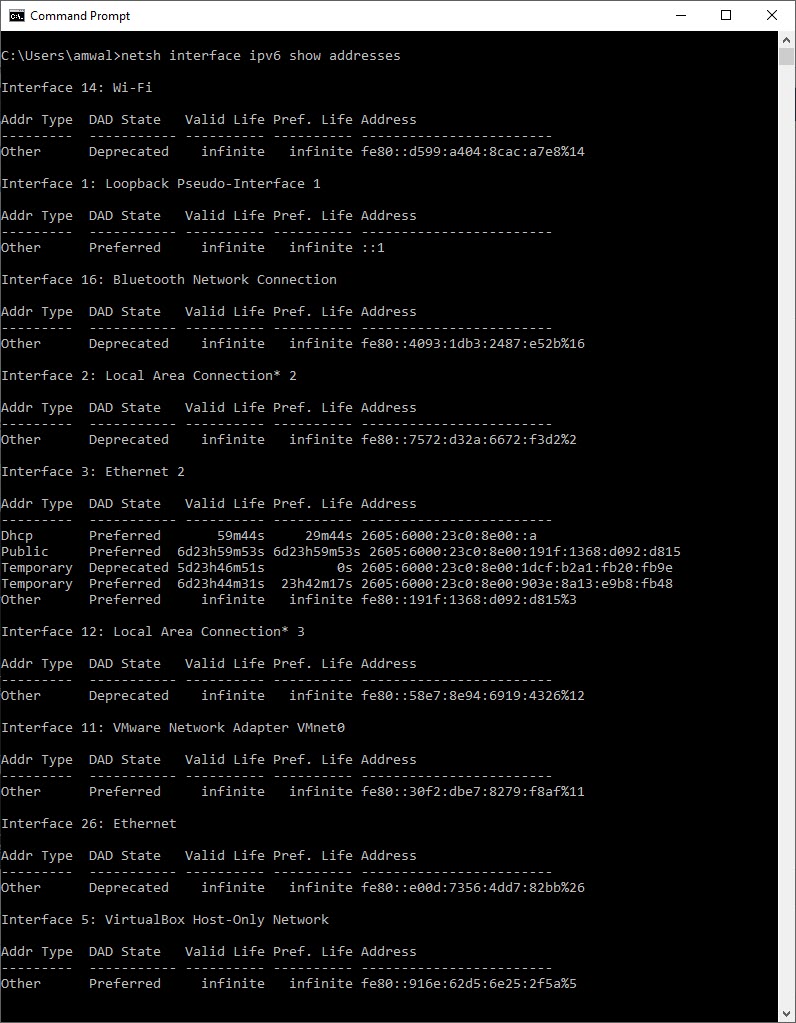 The main differences now are the inclusion of Temporary IPv6 addresses.

Here are some other netsh commands to try: 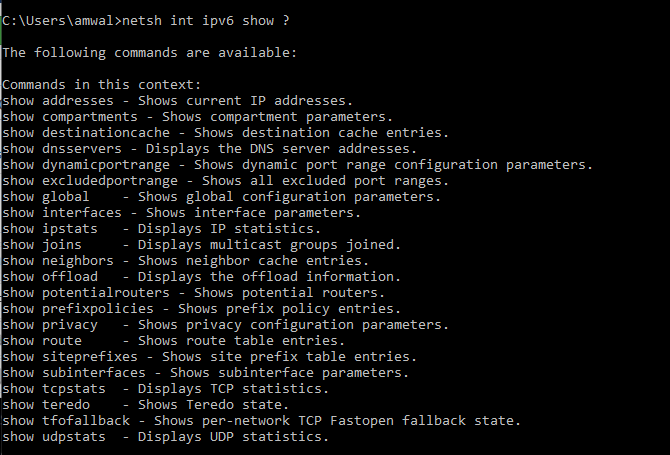 Try this one to see the Windows IPv6 global parameters: 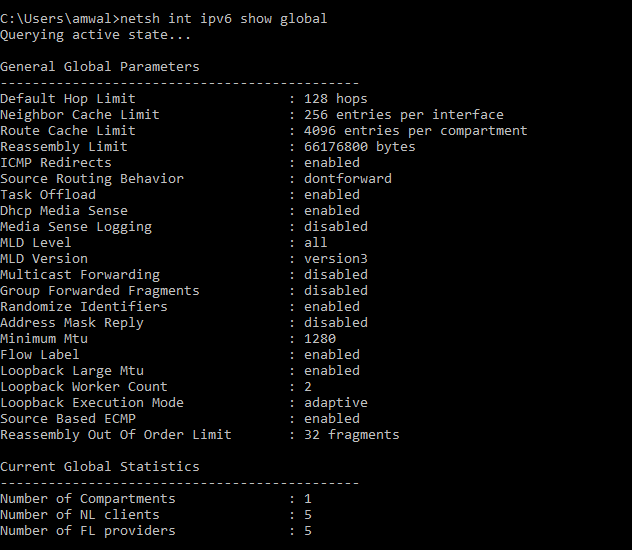 How about PING and TRACE ROUTE for IPv6?  Sure.  Here is how you Ping in IPv6: 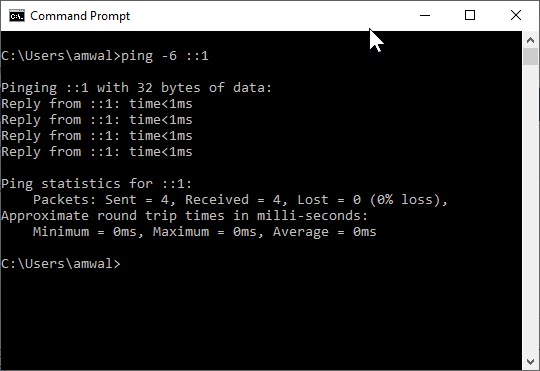 Here are the Ping options:

And here is the Trace route command (we are tracing to the www.google.com IPv6 address): 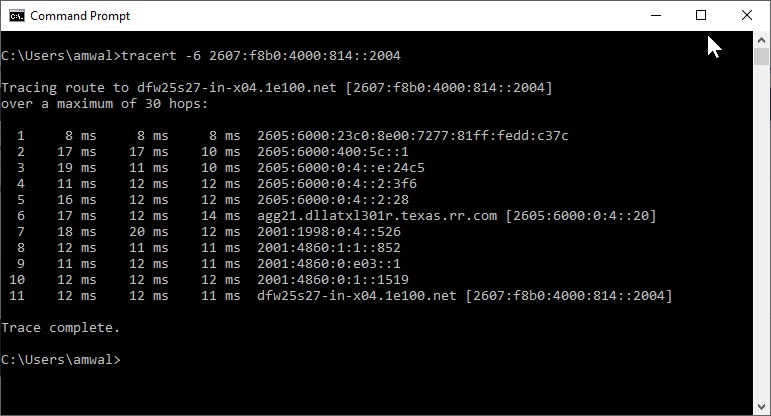 Here are the Tracert options:

Pathping is a Windows based command-line tool used to provide IPv6 information. The Pathping tool provides details about network latency and network loss at intermediate hops between source and a destination. The Pathping command works like a combination of ping and tracert.

Because Pathping displays the degree of packet loss at any given router or link, you can determine which routers or subnets might be having network problems. It provides more detailed network troubleshooting information as it performs the equivalent of the Tracert tool by identifying which routers are in the path. The program sends messages periodically to all the routers over a specified time period and computes statistics based on the number returned from each node. 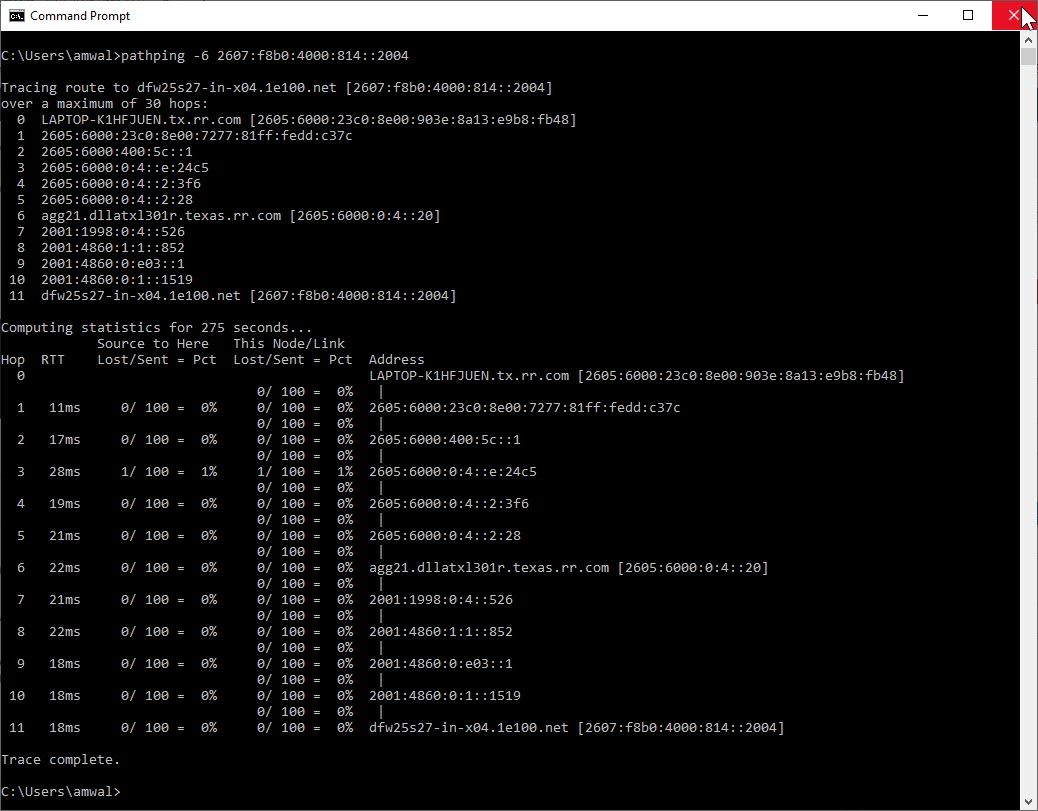 Here are the IPv6 pathping options:

If you cannot reach out via IPv6, you may want to see if your DNS is returning an IPv6 address.

To do this use ‘nslookup’, set the type to be quad-A, and then run a query: 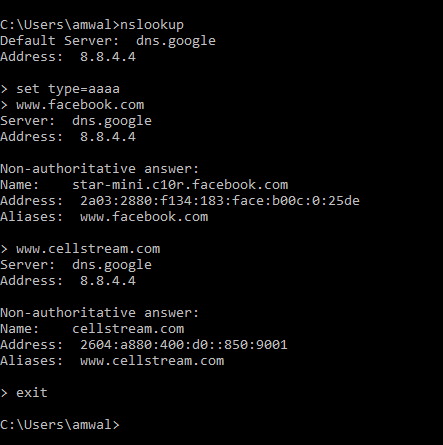 We can clearly see that we are getting IPv6 addresses for Facebook and CellStream!

You can also look at Path MPT or PMTU – but I have written a separate article on that command here.

We hope this helps you get started on IPv6 on your local Windows machine.

Did I miss any commands?  Let me hear your comments below….