The following is a must have reference for Linux systems networking operations.

We will be using the two basic commands: ‘ifconfig’, ‘iwconfig’, and ‘ip’.  If you are the rtoot or administrator you should have no issues using the commands as shown.  If you do not, you may want to use ‘sudo’ in front of the commands shown.

I am running this on Kali Linux, which is Debian.

View the Network Settings of all Interfaces on the System

Let’s use the plain vanilla ifconfig command with no arguments in a terminal window first: 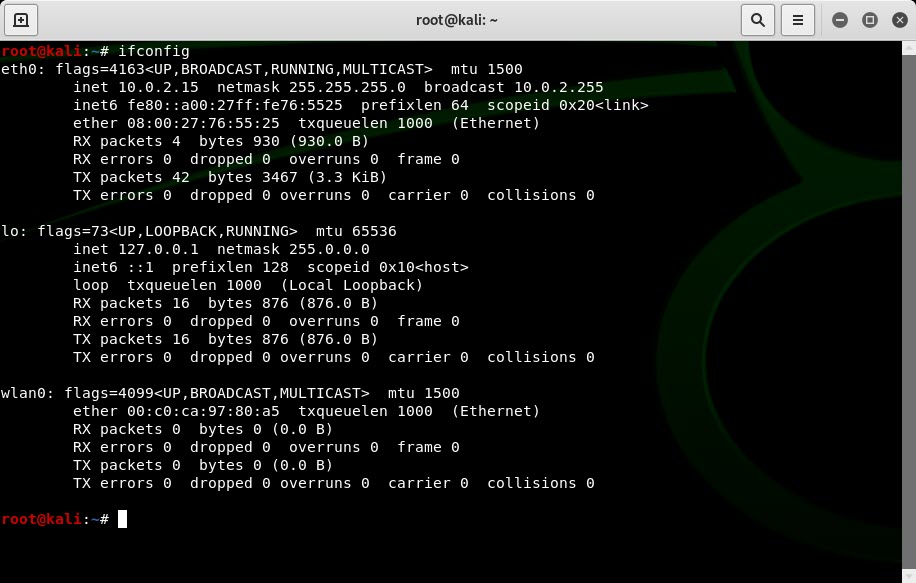 We see the network interfaces shown, with flags, MTU, address configuration (both IPv4 and IPv6), the MAC address, then some statistics (received and transmitted packets as well as associated errors).  When you run this command you may see more interfaces including your wireless LAN/Wi-Fi interface.

To just view your WLAN/Wi-Fi interfaces use the iwconfig command:

View the Network Settings of a Specific Interface

To examine a specific interface, use the ifconfig with the name of the interface: 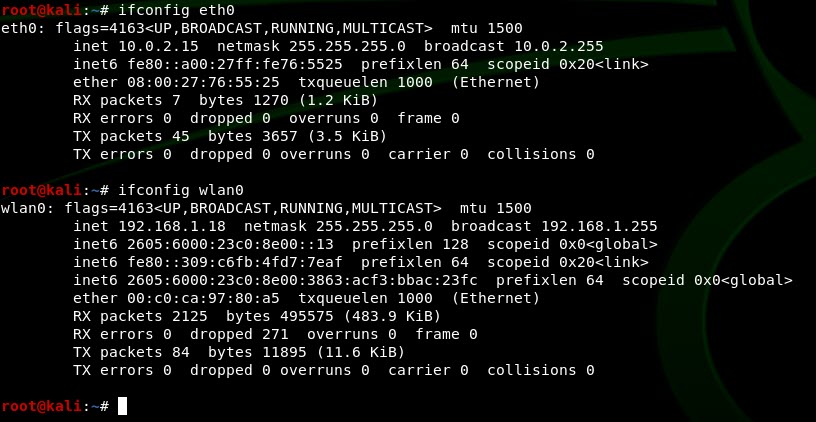 You can see in the above command outputs that IPv6 addresses also exist.  You can check IPv6 by using the following command:

Here is the command to use ifconfig for IPv6:

I will try to inject IPv6 below, but there is a separate article on this here.

Enabling or Disabling a Network Interface

Using the term ‘down’ or ‘ifdown’ along with the interface name will disable the interface.  The opposite, ‘up’ will bring the interface back up.  The example below takes eth0 down and then brings it back up.  Note the ifconfig command is run after each to show the changes: 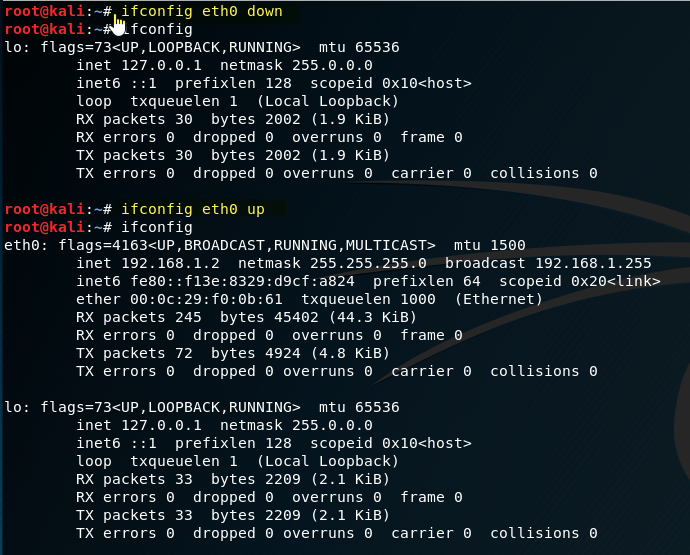 With the ip command we use the link set command: 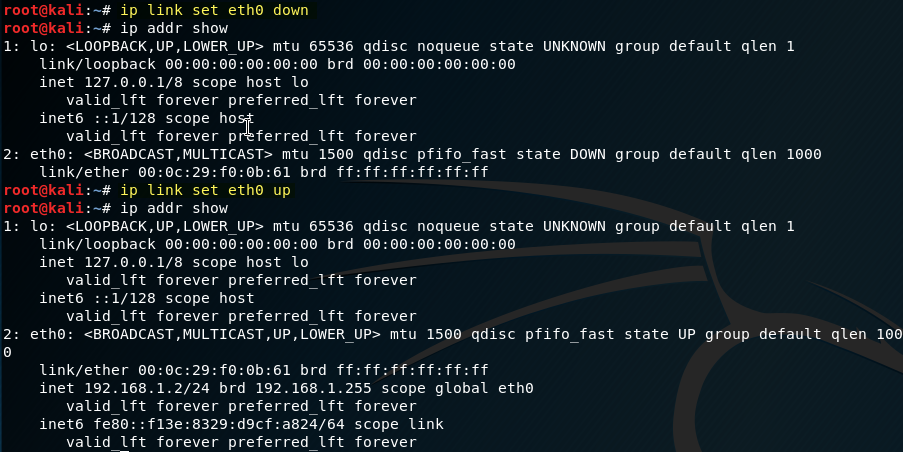 Note the subtle differene that with the ip command you see the interface is “DOWN”.

Statically Assigning an IPv4 or IPv6 Address to an Interface

Normally your system will use DHCP (bootp) to acquire an IP address from the local DHCP server or router.  However, if you want to statically set the IP address, there are serveral ways.  Keep in mind that you may need to also set the network mask as well, so even though you can do these things one at a time, we show the methods for doing them all.

Using the ifconfig command we will use the following:

You can do each command one at a time as follows:

To configure an IPv6 address using the ‘ifconfig’:

Another way to change the IPv4 address is to edit the following file: /etc/network/interfaces

We will use nano to do this (in terminal enter nano /etc/network/interfaces ): 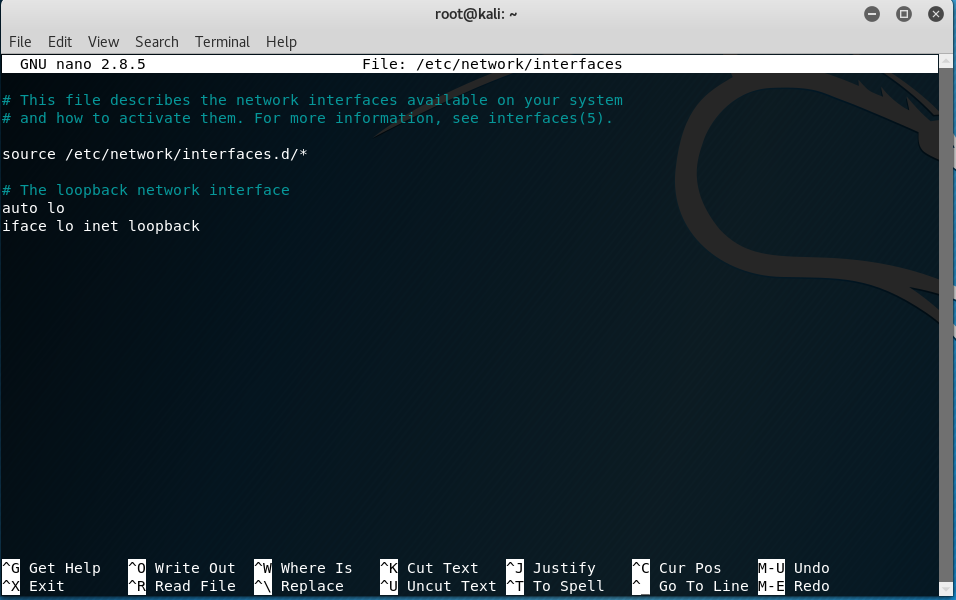 What we are going to do is ass the following text into the file: 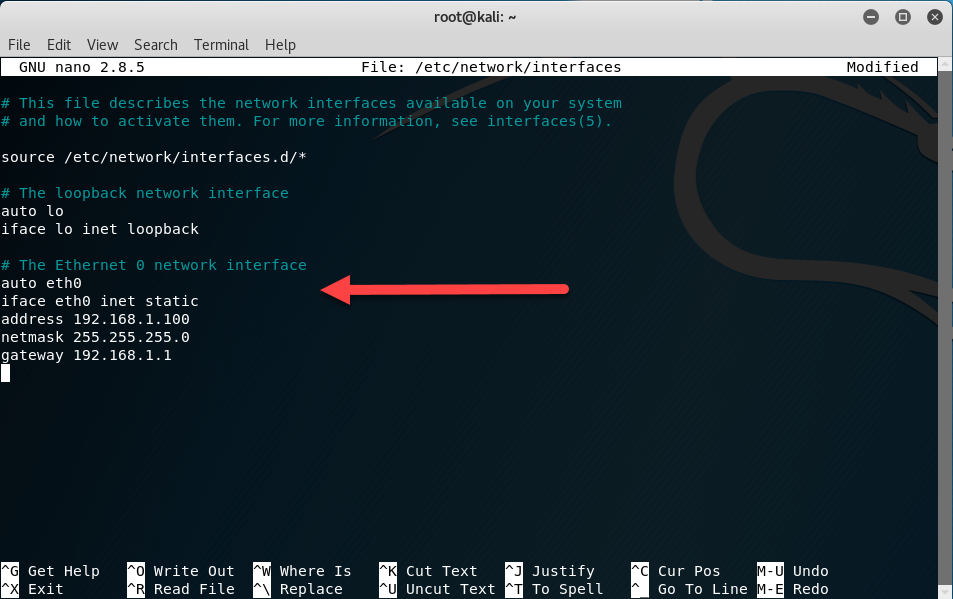 Then save the file.  Check the file is as you want with the ‘cat’ command:

OK, all looks good.  You will have to issue the following command to make the changes take effect:

In some cases you will have to reboot.

Then the changes will be made:

If you wanted to statically configure an IPv6 prefix, you can follow the same procedure with nano, except add the following lines editing to suit your needs:

Again, you will have to restart the networking or the system to have these changes take effect.

Removing an IPv4 or IPv6 Address from a Network Interface

To remove an IPv4 address from the network interface using the ‘ifconfig’ command:

To remove an IPv4 address from the network interface using the ‘ip’ command:

To remove an IPv6 address from the network interface using the ‘ifconfig’ command:

To remove an IPv6 address from the network interface using the ‘ip’ command:

Changing the MAC Address of an Interface

Sometimes we need to spoof another MAC/machine, or just change our MAC to make it easy to filter packets if we are sniffing them.

To change the MAC address of an interface use this commend:

Here is a before, a change and an after view: 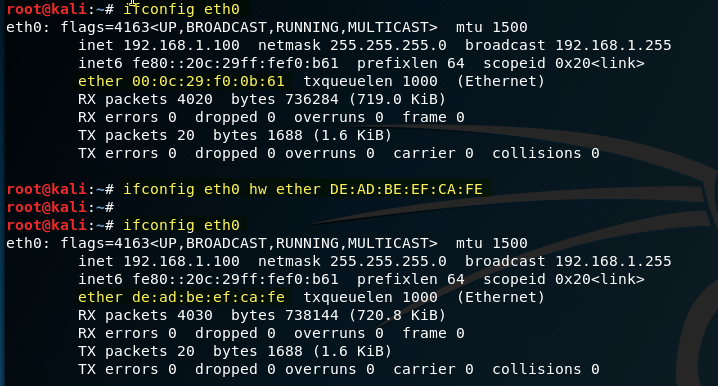 Normal Ethernet behavior filters packets that arrive at your interface that are not destined for your MAC, a Multicast group that you belong to, or broadcast.  These packets are essentially politely dropped.  In most switched ethernet environments the ethernet switch does this also.

What if you wanted to allow any and all packets received without being filtered?  This is called promiscuous mode.  Turning it on is easy:

Turning it off is also easy:

Try this and then use a packet capture (using a tool like Wireshark) to see if you notice a difference in your network.

Changing the MTU of an Interface

Normal ethernet has an MTU of 1500 bytes.  What if you want to run a network with bigger packets/frames?  First you will have to turn on ‘jumbo frames’ on all your switched ethernet interfaces (switches and routers).  Now you can increase the size of the MTU on the Linux system:

We have increased it to 2000 bytes above.

Want to make smaller packets/frames?  Just lower the number.  The problem here is that you will likel;y see slower throughput using smaller frames.

If you are a networking person, you know that every computer/system running Linux has a route table.  To display the route table use:

Another way to look at the routing table is with the ‘netstat’ command:

To make any of these setting default:

To make this persistent:

We hope this helps as a reference for Linux networking commands to at least get you up to speed.