Based in Dallas/Ft. Worth means you are a frequent traveler on American Airlines and Southwest, although silly outdated rules and laws make flying Southwest expensive for us Texans.  DFW Airport used to be a Delta hub until 9/11 changed their plans.

On a recent trip to Los Angeles, I decided to fly on Virgin America (VA) as their prices were cheaper than American Airlines and I had heard from a colleague that they had been impressed with the level of service VA provided.  Four round trip tickets were purchased departing from my infrequently used Terminal E concourse.  First things first: check-in was absolutely zero wait, with a nice person behind the counter.  Lines at the security were – well none.  Then the terminal itself offered child play areas, spacious seating with lounge chairs and television viewing that makes every American terminal look like years of ignorance, outdated design and dirty with overuse (Terminal D is excused).

Just before boarding time, the happy and pleasant gate agent ran down the plan, asked for a show of hands as to who was new to VA, simply and nicely explained the boarding process, and actually started boarding at the advertised time!  American, Delta, and United – take this down: when you say you are going to board 30 minutes before the flight – do it!!  Oh, and be nice!!  No one crowded the gate, no one got in the way.  Someone pinch me.  Boarding proceeded by group number: “A” for amazing, “B” for beautiful.  Everyone was smiling. There was zero stress.

We walked down the jetway and walked into astounding pink and blue lighting in what felt like a swak and modern night club atmosphere with smiling and happy flight attendants.  We were actually asked where we were traveling to and what our plans were?  This was old school flying and where did they find these nice people? 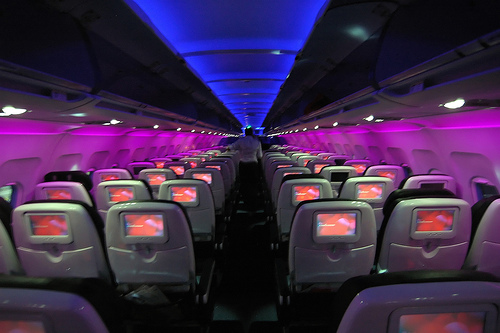 The seats were wonderfully comfortable and even though we were in the lowest fare seat, there was decent space.  Each seat has its own video/entertainment center, and high quality sound to boot.  The remotes are smartly positioned in such a way that you don’t loose the armrest, and you can still change channels and volume level.  The moving map is included on Google maps – not some closed system with zoom and movement – really nice.  There are games, lots of videos (some free some pay per view), music (create your own play lists from a limited but not small library), and even ordering meals/drinks from your seat.  Wow – a plane built and working in the 2000’s with the era appropriate technology.

Of course Wi-Fi was available though none of us needed it.  We all gave the seating and system a 9 of 10 when we arrived in Los Angeles.  Why not a 10 out of 10, you may be wondering?  Well, there were features that were not working like seat-to-seat chat (not broken, just not yet available), as well as some of the Dish Network channels were not available.  Grumble grumble.

We had departed and then arrived right on time, and stress free, we proceeded to our Hertz rental bus where we returned squarely back to reality.

We were all looking forward to the return flight and called the next day to sign up for the frequent traveler program.  Hopefully prices will remain low and service high.  Thank You Virgin America!

[Note: Virgin America no longer flies.  They sold their routes to Alaska Airlines.]