You have to think of and understand the Internet’s Domain Name Service -DNS- as a System.

The DNS is the system which, in its primary function, converts Internet domain names that you type into URL bars, or hyperlinks that you click on a web page into numeric IPv4 and/or IPv6 addresses. In a sense, the DNS system is the phone book of the Internet (for those who don’t know, a phone book was a list of numbers and names).  You can imagine this database looks something like this:

To understand how this works, let’s start with your computer – we will call it the client.  You type in some URL into your web browser and hit <Enter>.  Here is an example:

Your computer needs to translate the Fully Qualified Domain Name part into an IP address.

The first thing your system does is it looks at its local DNS Resolver Cache.  If you have visited that same site in the last 24 hours, it will be there, and job done, we can set up a TCP connection to that server and then do an HTTP GET.

To display or clear the DNS resolver cache in Windows, see the examples below:

Now, let’s say the answer is not in the local DNS resolver cache.  Your system sends out a DNS request to your local ISP’s Recursive Resolver:  If the answer is in the cache on that system, a response is received and your local cache is updated.  Now you can connect to the target web site”

Great.  But want if there is nothing at the local ISP Resolver?  This is where life gets interesting.

First, the ISP resolver send a message to one of 13 DNS Root server addresses.  More on the Root Servers below.  These are Anycast Addresses, and represent many many actual physical servers:

Contrary to what many will tell you, the Root Server response does not contain the answer (as it once used to many years ago).  Today what happens is the Root Server provides which Top Level Domain (TLD) server to reach out to:

Next, the ISP recursive server queries the TLD server.  This server then provides an Authoritative Name Server – again, not the answer itself:

Now we can ask the Authoritative Server and we get an answer!  This is then passed back to the Client and both their caches are updated:

Now we can go ahead and communicate to the target web server:

You can certainly do this, and in the event of a DNS system issue, you can continue to reach the systems you add.  Simply open the following file with any editor in Administrator mode: C:\Windows\System32\drivers\etc\hosts
This file has no extension.  By default everything is commented out.  Just add IP Address – TAB – Name and even if you flush your DNS Resolver Cache, these entries will always be there!  Below is the deault resolver cache file: 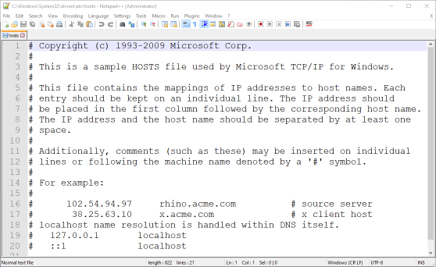 The DNS has always been and will always be an attack target.  Without the DNS translation, the Internet (for most) stops working.

There is a long history of attacks (not all are shown):

There have also been DNS Hijacking attacks:

Anycast was the technology that began to modify the DNS architecture.  Anycast has made the DNS system much more robust.

DNSSEC (Domain Name System Security Extensions), is intended to secure DNS by adding a cryptographic layer to DNS information.  The root zone of the Internet was signed for DNSSEC in July 2010 and the .com Top Level Domain (TLD) was finally signed for DNSSEC in April 2011.

There are 13 root server addresses in the Internet DNS.  The root servers are controlled by ICAN and IANA, and operated by different organizations (to see source go to https://www.iana.org/domains/root/servers):

Why are there 13 servers?

The answer is history, protocols and mathematics.  When the DNS system was designed, the size limit of DNS responses using the User Datagram Protocol (UDP) was set to 512 bytes (look at Section 2.3.4 of RFC 1035).  Starting with a packet size requirement of 576 bytes, if you work backwards, you have a 20 byte IPv4 header followed by an 8-byte UDP header, then the UDP payload could be up to 548 octets long (576-20-8=548).  If you also allow for up to 40 bytes of IP options, then in order to ensure UDP packet acceptance under all circumstances the maximal UDP payload size should be 508 octets. The DNS use of a maximum payload of 512 bytes is not completely inconsistent with the math, but it is off by 4 bytes.

Now let’s say you are getting the root server information to begin your database (called a DNS priming query), you will receive a DNS response packet no longer that 512 bytes of payload.  Therefore only 13 IPv4 addresses and server names will fit!

What about IPv6, you may be thinking.  The answer there is that you will get a partial set of answers with no indication of what is missing.  For example you might get a fist packet of 508 bytes that contains IPv6 addresses for A through J, with the remainder IPv4 addresses arriving in a second packet.  Some root servers will answer differently.  If you wanted everything, you need a 1097 byte payload (see RFC 6891).

Where are these servers?

First, there are not just 13.  That used to be the case, but thanks to Anycast technology, we now have hundreds of servers sharing the 13 addresses.  You can view these servers at root-servers.org:

On that same web page (at the bottom), you can select any one of the 13 organizations and view the details of their servers:

If you just wanted to get a text list of all 13 root servers and addresses, navigate in a web browser to: https://www.internic.net/domain/named.root

Another fun thing to do is run ‘dig’ (stands for Domain Information Groper) on your MAC or Linux computer.

We see the 13 root servers being shown.

Let’s dissect the output from the dig command.  The format of a dig response has five sections:

Here is a list of value references (keep in mind that Wireshark will annotate all of these items):

The last few lines of the dig response yield useful performance information. The SERVER line particularly confirms the address and name of the server from which the results were obtained.

Let’s continue the journey by trying one of the root servers: